Wittmann Battenfeld with innovative momentum at the K 2016

2016-07-20
Tweet
Under the motto "be smart", Wittmann Battenfeld will present numerous innovative novelties at the K 2016 in Düsseldorf from 19 to 26 October in hall 16, booth D22. The absolute highlight of this year's K trade fair is the new UNILOG B8 control system, which is available for all machines of the PowerSeries. But the innovations in terms of machine technology are also quite noteworthy. Integration into the world of Industrie 4.0 is a recurring theme in the majority of exhibits on display.

The trade fair highlight: the new UNILOG B8

The new UNILOG B8 control system from Wittmann Battenfeld, demonstrated on an EcoPower for the first time at the 40th anniversary of the Wittmann Group, will be shown on every single machine exhibited at the K in Düsseldorf. This new control system generation distinguishes itself from its predecessor version by several additional features and even greater operator comfort. Via an attractively designed, pivotable 21.5" full HD multi-touch screen, the process functions can be retrieved by gestures (zooming/wiping), while some selectable operating functions are triggered by tactile keys located in the machine's central console. This makes it possible to address frequently used functions easily and directly.

Visualization and operation of the machine run under the new Windows 10 IoT operating system, which offers an extensive choice of options for a modern user interface and enables easy integration into the open world of Windows applications. A display screen which can be partitioned allows simultaneous visualization of two different functions. This is a special advantage, since thanks to Wittmann 4.0 technology, it has now become possible to visualize and operate machines and peripheral appliances in parallel via a single monitor screen. Assistant wizard and help systems support operators in machine setting and process optimization. 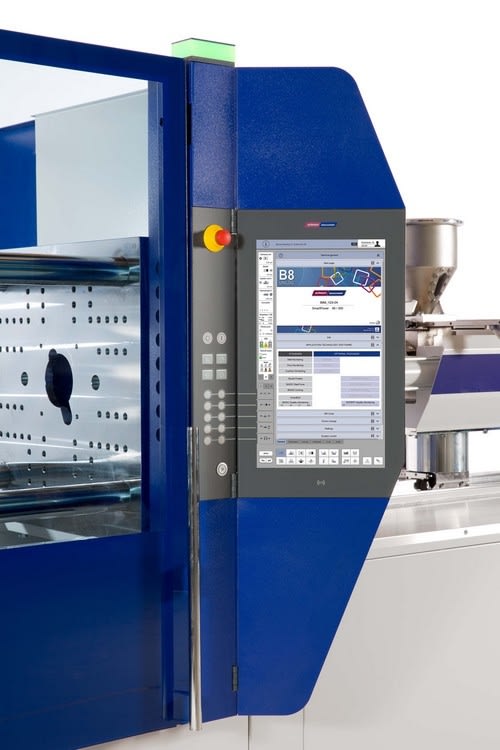