2011-09-08
Tweet
It is not only the packaging industry that demands top performance from injection moulding technology. The huge market for consumable medical devices, in particular, makes similar requirements regarding the maximisation of output and production efficiency.

In addition to this, there is a comprehensive quality assurance process and sometimes extremely strict requirements with regard to the production environment. The Japanese-German manufacturer Sumitomo (SHI) Demag Plastics Machinery GmbH offers suitable manufacturing solutions for this demanding market as well, as was evident at the Market Segment Meeting "Trends and Technologies in Packaging".

"Medical technology also uses many thin-walled products. A typical mass-produced product in this area are petri dishes, which could be described as high-end packaging for laboratory use," explains Jens Löwe, Medical Market Segment Manager at Sumitomo (SHI) Demag. "A clear trend can be seen here," he continues, "medical technology is following the packaging sector.

It has to make production as efficient as possible in the face of much stiffer competition - especially in the case of mass-produced products." So the El-Exis SP is a model that is much in demand in this area as well. Just recently this manufacturer of injection moulding machines supplied two systems for the production of petri dishes to Becton, Dickinson and Company (BD), one of the world's largest manufacturers of medical devices. The customer decided in favour of these hybrid high-performance machines due to their proven reliability, low energy consumption and short dry cycle time.

If strict requirements are also made in relation to the cleanliness of the production environment and the precision of the product, another successful series from Sumitomo (SHI) Demag comes into consideration: the all-electric IntElect. The drive technology of this series is consistently based on energy-efficient direct drives. 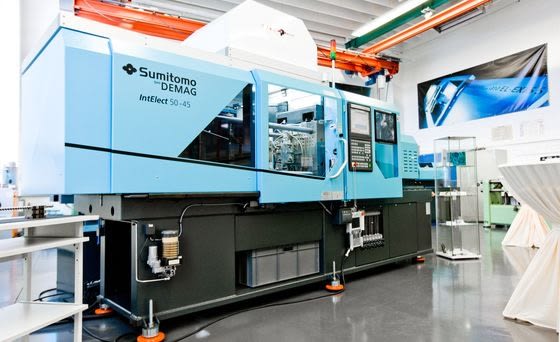 Due to the swifter reactions of direct drives in comparison with indirect electric drives, the electric machines from Sumitomo have a higher degree of precision and greater repeatability, also offering a significant cycle time advantage. This excellent repeatability with outstanding process capability values forms the basis for zero-error production. With these features, the models of the IntElect series are ideal for the production of mass-produced precision articles for medical applications, such as pipettes and cuvettes.

The all-electric standard machine, which is already suitable for cleanroom applications without further adaptation, can also be easily enlarged into an independent cleanroom manufacturing cell, connected up to a cleanroom or even completely installed in a cleanroom - depending on the requirements for the injection-moulded product to be manufactured. A solution which is popular because it is very economical is the use of laminar flow modules over the critical process area. Mounted above the mould area, these modules ensure a constant laminar air flow, safeguard the cleanroom category ISO 7 in a corresponding production environment and prevent particles from entering.

At the Market Segment Meeting, Sumitomo (SHI) Demag, together with the Swiss mould manufacturer Schöttli AG of Diessenhofen and the cleanroom specialists Max Petek Reinraumtechnik of Radolfzell, presented a compact, all-electric injection moulding cell. The IntElect 160 (1,600 kN), which is equipped with a laminar flow module from Petek, produced syringe cylinders weighing 1.25 g (with a shot weight of 60.2 g) with a 48-cavity hot runner mould from Schöttli.

Schöttli's own hot runner system with lateral gating is also the basis of the compact design of the 48-cavity mould for cleanroom applications, thus allowing a large number of cavities to be accommodated in a small area. In addition to the economical mould concept, the electric machine demonstrates its advantageous standard features in this efficient cleanroom cell. The parallel movements of the nozzle assembly and the ejectors allowed the complete system of compact dimensions to achieve short cycle times of around 8 s.

Visitors were made aware of the cleanroom quality currently being achieved by means of a particle counter. Here Sumitomo consistently follows the just-enough principle, achieving the required cleanliness of the production environment with as little input as possible.

Due to the enlarged tiebar spacing and the linear guides for the movable platen, the IntElect can easily deal with voluminous and heavy multi-cavity moulds.

For the K 2010 Sumitomo (SHI) Demag added four new models to the IntElect series with clamping forces of between 2,200 and 4,500 kN and now offers the all-electric series in eight sizes from 500 to 4,500 kN.
Read more: Injection moulding 421 Technologies 302