Strong interest in the Freeformer and functional parts from Arburg

2017-12-08
Polish version
More than 21,000 trade visitors flocked to the formnext 2017 in Frankfurt, almost half of them from abroad. For Arburg, which has been an exhibitor from the very outset, the fair was a great success. The company, one of the world's leading manufacturers of injection moulding machines, catered perfectly to the target group for industrial additive manufacturing with the Freeformer at the formnext trade fair.

"At times, people were buzzing around our stand like bees in a hive. Our stand team, which we had significantly expanded compared to last year, was kept really busy and held a large number of very promising discussions," said Eberhard Lutz, Director Sales Freeformer at Arburg, expressing his great satisfaction with the response from trade visitors. "The formnext affords us an opportunity to meet a very different audience than at injection moulding trade fairs. Moreover, the international character of the fair has again increased significantly. Numerous visitors came from Germany's neighbouring countries, as well as from Eastern Europe and Asia. These are all important markets for Arburg."

"In terms of additive manufacturing, it was all happening last week in Frankfurt. The formnext was a great success for us and is well on the way towards establishing itself as a world-leading trade fair," said Dr Christoph Schumacher, Head of Marketing and Corporate Communications at Arburg. In his view, the fact that the Freeformer and Arburg Plastic Freeforming appealed to so many new customers and interested parties was attributable to the new stand concept: "In addition to two Freeformer exhibits and eight monitors displaying information about the APF process, our 150-square-metre stand also included four interactive stations for the first time. Here, visitors were able to pick up a total of twelve parts, allowing them to experience their functionality and quality for themselves 'hands on'. Furthermore, around 40 more functional parts made from qualified standard granulates were displayed on two large illuminated shelving units. This encouraged many visitors to enter into more detailed conversations with our experts."

The open system affords users independence: Freeformer customers can qualify their own original material and optimise the freely programmable process parameters specifically to the application at hand. The additive processing of standard PP Braskem CP 393 and the specially developed support material Armat 12 to produce functional cable clips was a new feature. These delicate yet durable structures featured the click effect typical of injection moulded parts. Arburg has thus expanded its material range for industrial additive manufacturing with an important semi-crystalline material. The range also includes amorphous standard granulates such as ABS, PA and PC, as well as elastic TPE, the high-temperature plastic PEI, medical grade PLA and PC approved for the aviation industry. 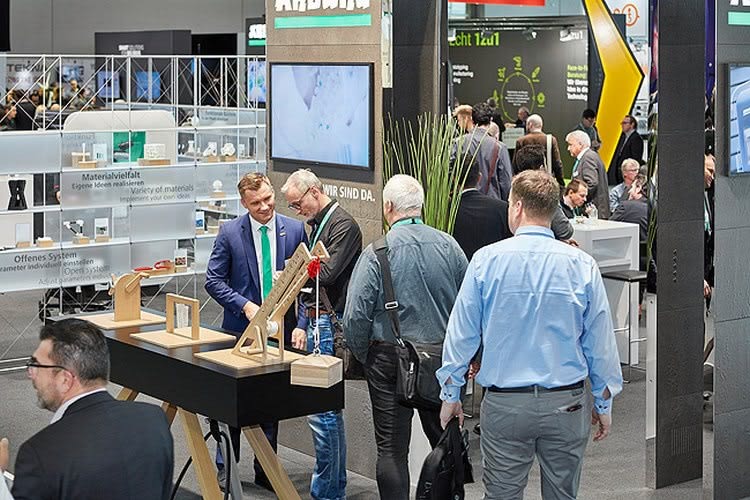