Polymer companies recognise that their future success won’t just depend on working with the brand owners and retailers on redesigning packaging, which will require them to invest in new technical/commercial teams. They will also have to take responsibility of the final disposal of plastic products.

Some companies believe that legislators will introduce plastics taxes, or even a plastics credit trading system similar to the carbon credits system in the EU, which penalises or benefits companies, depending on the extent to which they sustainably dispose of plastic rubbish.

The core of the disposal problem centres on ten rivers in the developing world, eight in Asia and two in Africa. A 2018 study by the Helmholtz Centre for Environmental Research estimates that 90% of the plastic rubbish in the world’s oceans comes from these ten rivers.

One polymer company leading the way is the Vienna-headquartered Borealis. It is partnering with the Norwegian government and other companies in establishing a plastic rubbish collection and recycling scheme in the city of Muncar in East, Java, Indonesia. The aim is to prevent 10,000 tonnes of plastic rubbish from leaking into the ocean over the next five years.

“I think it’s only a question of time before we see some sort of global legislation aimed at plastic rubbish. As legislation develops this could change the terms under which we operate,” added the strategic planner with the oil, gas and polymers company.

PE is the polymer or plastic most exposed to the plastic rubbish crisis as more than half of its end-use applications are single use. It is heavily used it to make plastic films, food containers and bottles.

The growth of PE demand since its invention in the 1930s, when it was first used to insulate radar cables, has been quite staggering. The ICIS Supply & Demand data on PE goes back as far as 1978. In that year, global consumption was just 11m tonnes, but by 2018 it had reached 102m tonnes. Annual average percentage demand growth was at 5.7%. 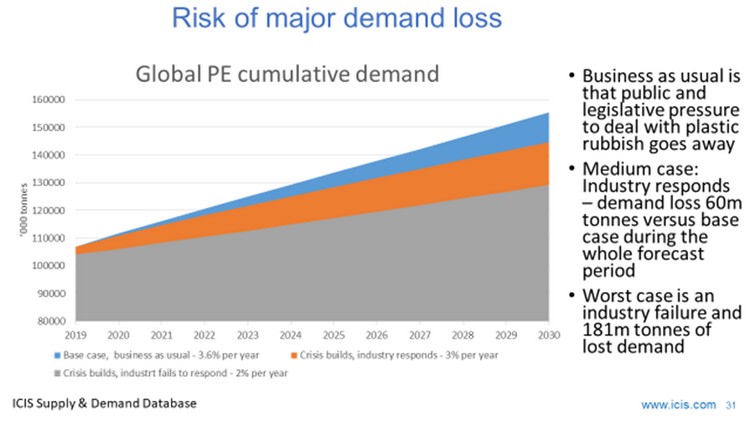 The ICIS base case forecast is that from 2019 until 2030 global demand will jump further from 107m tonnes to 156m tonnes at an annual average growth rate of 3.6%. This “business usual” base case assumes major effect from the public and political backlash against plastic rubbish.

The two other ICIS scenarios present very different outcomes for PE demand and thus the financial fortunes of the polymer producers.

Scenario 2 assumes moderately lower growth of 3% per annum as the industry successfully works with brand owners and retailers to redesign packaging, invests substantially in mechanical and chemicals recycling and in reducing river and ocean pollution.

Instead of being focused mainly on getting hold of cheap oil and gas raw materials to make more and more PE, the focus of the producers switches to being service or solution providers for the plastic rubbish problem. These new services help replace the revenue lost by 2019-2030 cumulative demand growth being 60m tonnes less than in our base.

But, if the polymer industry were to largely ignore the problem then PE would be increasingly replaced by other more recyclable packaging materials such as aluminium and paper. Brand owners and retailers would stop using PE entirely wherever possible, in favour of other materials. Here we see PE demand growth falling to just 2% per year.

The effect on the polymer industry would be quite devastating under this third scenario. In each of the years between 2019 and 2030, on a cumulative basis again, demand would be 181m tonnes less than our base case.

In the great scheme of things, Scenario 3 might appear to have few consequences beyond the effect on the companies themselves. But many of the major polymer producers are also oil and gas producers and some of the household names that are important for stock markets and pension funds. This worst-case outcome would therefore have broad implications.

The good news is that ICIS sees this third scenario as highly unlikely as the polymer companies are showing every indication of taking the plastic rubbish problem very, very seriously.