2014-10-23
Tweet
Engel e-pic - this is Engel Austria's revolutionary response to the demand for maximum efficiency in pick-and-place applications with small moulded parts and sprues. Thanks to its innovative kinematics, the robot works particularly quickly, while at the same time saving space and using energy efficiently.

The Engel e-pic was celebrating its world premiere at Fakuma 2014 in Friedrichshafen, Germany. "The level of automation is continuing to increase rapidly worldwide. In Europe, we will not be producing off-mould parts in the long term," said Dr Stefan Engleder, CTO with Engel Austria, when introducing the new development at the fair. This statement unequivocally confirms the fact that, in addition to tailored automation solutions, the need for flexible and, at the same time, standardised robots for simple handling tasks is growing. This new development now sees Engel cover the complete spectrum of handling requirements in injection moulding in an even better way, from simple part removal, depositing, and sprue separation, through sophisticated insert-placing and take-out, to combining various process steps in a highly-integrated production cell.

The objective in this product development was to combine maximum performance with maximum economy. The totally new kinematics makes a decisive contribution towards achieving this by combining linear movements with a swivel arm. Another important efficiency factor is the use of weight-optimised parts which keeps the accelerated masses low. In this way, the servomotor-driven robot can achieve the shortest possible take-out cycles, and it only has low energy requirements. In comparison with linear robots of the same size, the Engel e-pic only needs half the amount of energy.

The compact design also contributes to its excellent efficiency. When deployed on injection moulding machines with an integrated conveyor belt, the Engel e-pic works inside the machine's safety gate without needing extra space. And it needs far less vertical space than comparable third-party robots.

Equipped with its own control unit, the Engel e-pic robot can be deployed not only on Engel injection moulding machines, but also third-party machines without needing any machine-specific customisation. A separate base is not required, nor is an external switch cabinet. The electronics are completely integrated with the mechanical superstructure.

In combination with an Engel injection moulding machine, the robot can be easily integrated with the CC300 machine control unit. The robot and machine then access a shared database, thus enhancing process assurance and operator convenience, while achieving efficiency optimisations in production sequences.
The robot control unit supports intuitive control via the touch panel. When installed on a new or existing machine, the robot can immediately be commissioned, without programming skills. The control unit converts the rotary motion of the robot swivel arm into a linear movement. Those who are used to working with linear robots have no need to learn new skills.

The Engel e-pic is designed for horizontal and vertical part removal and handling of small parts and sprues with a load-bearing capacity of up to 2 kg. It is deployed on injection moulding machines with clamping forces up to 2,200 kN. 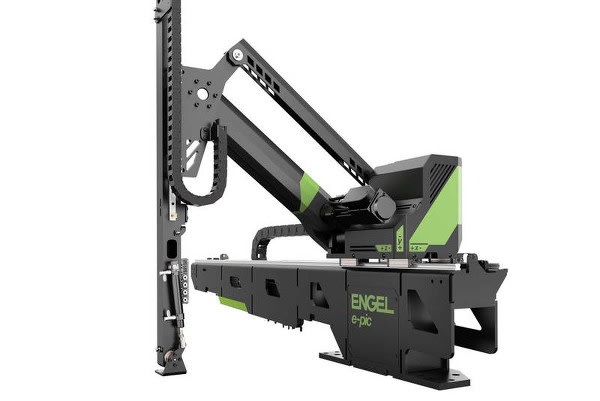 Fakuma 2014
The International Trade Fair for the Plastics Processing