Plastics processors intending to produce high-clarity polypropylene mouldings now have two compelling reasons for using grades containing Milliken’s next-generation clarifying agent, Millad NX8000. Not only does it yield unparalleled transparency in injection- and blow-mouldings, but it has also now been proven to allow significant savings in energy consumption through reduced processing temperatures and lower cycle times.

Trials recently carried out by Milliken in collaboration with leading injection moulding machine maker, Arburg, have shown that total energy savings of around 20% can be commonly achieved, with some evaluations showing savings as high as 35%.

Milliken carried out a series of trials using an all-electric Arburg machine Allrounder 520 A with a clamping force of 1500 kN to produce a utility drawer in two different grades of polypropylene, with melt flow rates of 25 and 60 g/10 min, both of them containing Millad NX8000. 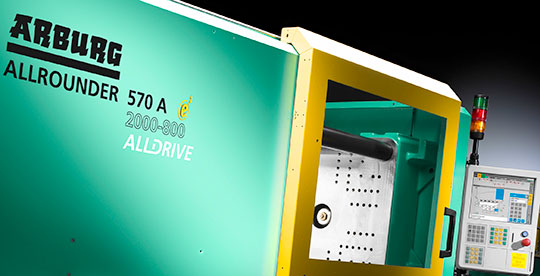 They showed that by reducing the processing temperature from 240°C to 200°C (while leaving the cooling and overall cycle times the same), the total energy consumption of the machine and its auxiliaries was reduced by 9%. And because cooling time could be reduced as a result, the cycle time could be improved by several seconds, yielding a total improvement in energy efficiency for the entire machine of 22%. Compared to running the machine at 280°C (not unusual for these types of resins), the energy saving amounted to 35%.

Energy savings achieved through temperature and cycle time reductions far outweighed any increases in consumption due to higher screw torque and injection pressures needed because of the higher viscosity of the resin under the new low temperature conditions.

The trials involved the production of a drawer weighing 42 g. In production runs using a 60-MFR resin, ‘standard’ production conditions at 240°C required a cycle time of 15.5 s; for a run consuming one tonne of material, the total energy cost was 81.9 euros (based on an average cost for industrial energy in the Eu of 0.1177 €/kWh). Reducing the temperature to 200°C cut the energy cost to 74.6 €/tonne, while reducing the temperature and then optimizing the cycle time at 11.5 s brought the figure down to 63.7 €/tonne.

- We knew from previous evaluations that conventional clarifiers need a certain minimum level of energy input - which typically equated to temperatures over 220°C during processing - to ensure full solubility and hence performance in the final application - says Adam Newberry, Technical Account Manager for Europe and the Middle East. “Millad NX8000 has much better solubility characteristics in PP, and these allow lower processing temperatures to be used.
Read more: Additives 149 Plastics 601