2018-11-20
German version
To celebrate 180 years of KraussMaffei and the 180th injection molding machine for Wirthwein, the two companies took this opportunity to give the anniversary machine a one-of-a-kind look. Street artist Ralf Spitzer, well-known throughout Europe by his alias Shamey ABC, lent a street art flair to the GX 900-4300 BluePower with his special airbrush technique. Illustrations on the machine include the faces of company founders Georg von Krauss and Joseph Anton von Maffei as well as Walter Wirthwein.

Dr. Hans Ulrich Golz, President of the Injection Molding Machinery segment at the KraussMaffei Group, adds: "This anniversary of the 180th injection molding machine - 180 years after KraussMaffei was founded - is very special for both companies. We are proud of our long, trusting partnership and look forward to many more projects." The GX 900-4300 is heading to Wirthwein headquarters in Creglingen/Germany, where it will produce high-end window frame covers for the vehicle doors of a South German automaker in the premium segment.

"We have been benefiting from the innovative products and the tailored service provided by KraussMaffei for decades. We are very excited to have the 180th injection molding machine from our longtime partner at our factory in Creglingen," says Marcus Wirthwein, Chief Technical Officer at Wirthwein AG. "This is a strong symbol of both our excellent cooperation with KraussMaffei as well as the sustained growth and continued further development of our location." 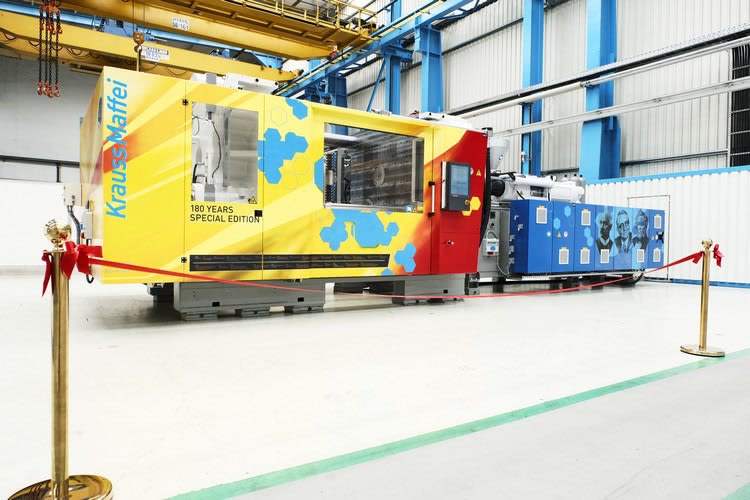 KraussMaffei wanted to break new ground in designing the anniversary machine, so it went somewhere completely new and brought in a renowned street artist. For Shamey ABC, designing an injection molding machine was a new experience and a great personal memory for him. "It was a ton of fun to spray-paint an entire machine with all its three-dimensional surfaces and shapes." The artwork has a unique, modern style that was received very well by all those involved. "The colorful graffiti is an eye-catcher. We have several young employees who are sure to love it," says Marcus Wirthwein.