In addition, battenfeld-cincinnati introduced its new, flexible RTA 250+ pipe cutter at the Open House during K. The RTA 250+ can cut both PVC and PE pipes with diameters between 32 and 250 mm and wall thicknesses of up to 50 mm at a maximum speed of up to 30m/min.

battenfeld-cincinnati's Packaging Division showed the Multi-Touch roll stack in production for the first time at the Open House in October 2013. The Multi-Touch roll stack impressed visitors with absolutely even cooling and calibration of the sheet on both sides with extremely narrow thickness tolerances. This is possible due to the innovative set-up with two large chill rolls followed by five post-cooling rolls. 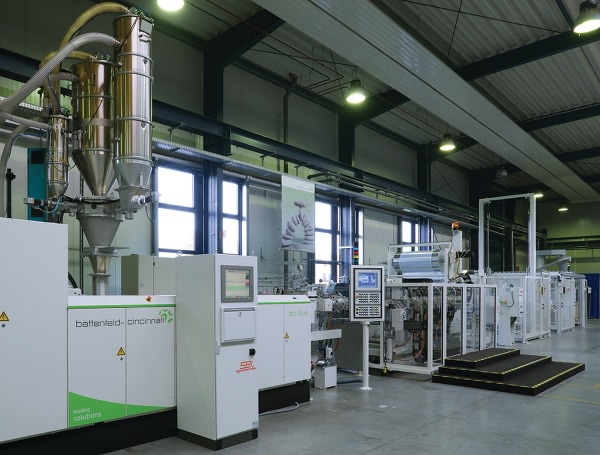 PP sheet extrusion line with Multi-Touch roll stack
In 2013, battenfeld-cincinnati also received an order for the fifth pelletizing line from Metal-Plast, Świebodzice (Poland), one of the largest European PVC window re-pelletizing companies. "We have been operating with extrusion equipment from battenfeld-cincinnati for almost 8 years", explains Metal-Plast's Managing Director. "After also purchasing some equipment from other suppliers and testing it under production conditions, we came back to the technology from battenfeld-cincinnati every time. We were particularly satisfied with the equipment's long service life under tough production conditions and its easy operation." The complete line is equipped with a BC 2-92-28V twin-screw extruder and reaches a regrind output between 500 and 800 kg/h.