2011-01-26
Tweet
In collaboration with partners Hummel-Formen and KVT Bielefeld, Engel blazes the trail for a new dimension in process integration. The Engel joinmelt process supports hot gas welding directly in the mould.

This solution, for which a patent is pending, promises considerable potential savings, especially in the automotive supplies industry. "This removes the need for additional welding equipment. Part take-off and re-insertion are no longer needed, as the finished product can simply be taken off directly out of the mould." as Franz Füreder, the Head of Engel's Business Unit Automotive emphasises.

To allow this to happen, both halves of the component are injected simultaneously into a single mould. After the cooling phase, the mould is opened; one half of the part stays in the left half and the other in the right half of the mould. The movable left half of the mould is now positioned so that both parts are opposite each other in welding position. The heating element is positioned between the cavities and the edges of the component halves are heated. When the mould closes, the two parts are bonded so that the finished part can be taken off when the mould re-opens. 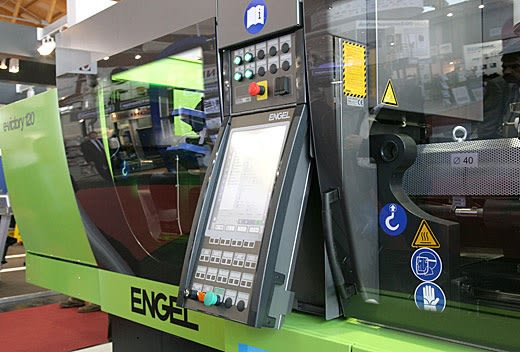 Besides the enormous savings potential thanks to the integration of two manufacturing steps which were previously performed in sequence, Engel joinmelt also helps to improve the quality and functional safety of the parts. The fact that both product halves remain fixed in the mould during the welding process avoids issues with warping and considerably reduces the time to market. The process creates a clean and thin weld which is particularly strong and achieves a superior quality to welds created by legacy techniques with respect to bursting pressure.

This new technology is suitable for all thermoplastics. The process developers see huge potential in processing of glass fibre reinforced polyamides as media-bearing parts for deployment in engine compartments. Thus far these components have always had a visible bulge at the joint, making them prone to friction and reducing the service life of other functional parts, such as the valve tappets.
As the Engel joinmelt process avoids the bulge, the process additionally saves material and weight. Another benefit becomes apparent as early as the development phase of new products: there is no need to take a specific welding direction into account, and this means freedom of choice with respect to part geometry.

Engel developed the new technology in cooperation with two partner companies with the injection moulding machine manufacturer taking responsibility for developing both the machine technology and the software for controlling the integrated process workflow.

Hummel-Formen in Lenningen applied for a patent for hot gas welding in the injection mould and has contributed its mould technology know-how to the collaborative project. The company with its staff of 250 at two works specialises in injection and compression moulds for plastics with weights of up to 100 tonnes. Its service portfolio covers everything from product development through to sample making under serial production conditions.

KVT Bielefeld is responsible for the welding technology in Engel's joinmelt project and holds a patent for hot gas welding in a protective atmosphere to ensure a particle-free and highly stable weld. The company specialises in the development and production of plastics welding machines for use in various industries from automotive and domestic appliances through to telecommunications and medical technology.
Read more: Machines 478 Technologies 301