Delta now producing conductive compounds on a ZSK from Coperion

The extruder serves to mix conductive carbon black into the melt. The polymers processed include polypropylene, polyethylene, polystyrene and polyamide 6. Depending on the requirement – from antistatic to readily conductive – the twin screw extruder, equipped with 76 mm diameter screws, produces compounds with a carbon black content of between 15 and 40 % w/w at an output rate of between 1,000 and 1,500 kg/hour.

Following extensive testing at Coperion’s test lab, there were several good reasons for Delta’s decision in favour of the ZSK 76 MEGAvolume PLUS. The deep-flighted screws with their outer/inner diameter ratio of Do/Di = 1.8 permit downstream metering of the conductive carbon black into the already molten base polymer via a ZS-B twin screw side feeder – irrespective of the amount to be added and the output rate of the extruder.

The melt in the process section is effectively degassed by means of a ZS-EG twin screw side devolatilization unit. The typically large free screw volume of the ZSK MEGAvolume PLUS considerably minimizes shear on the product. This gentle treatment of the melt combined with the direct downstream metering of the carbon black into the melt preserves the conductive capability of the carbon black. 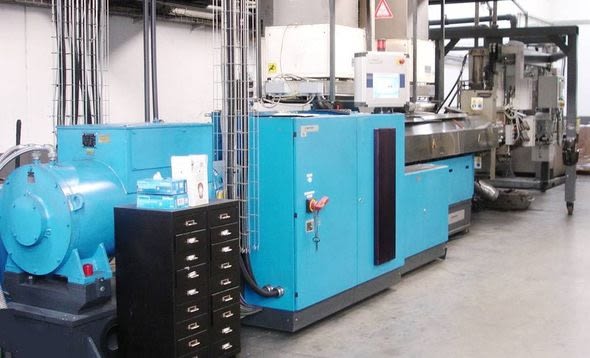 The screws feature special mixing elements that distribute the carbon black uniformly within the polymer matrix, thus ensuring the desired conductivity of the end product with small amounts of added carbon black. Throughout the entire output range, and for all formulations, the compounding system is distinguished not only by a constantly high, reproducible quality of product but also by its extremely high economic efficiency. Other important reasons for choosing this compounding extruder were the advantageous output/capital cost ratio, the low personnel costs for the operation of the system and the low specific costs for energy, maintenance and repair.

Comprehensive preliminary testing carried out on a ZSK MEGAvolume PLUS in Coperion’s test lab showed that the electrical resistivity in the compound will be reduced by up to 12 powers of ten when filled with a specific type of carbon black within a narrow density range of between 16 and 20 % w/w. This so-called percolation effect results from the fact that the carbon black particles are uniformly distributed in the base polymer and, within this range of concentration, begin to touch one another in rapidly increasing quantities.

The compounding line has now been in service since August 2011. Manfred Fiedler, works manager at Delta Kunststoffe AG, sums up Delta’s positive experiences with the compounder as follows: “The ZSK 76 MEGAvolume PLUS was certainly the right choice. Thanks to its volumetric capacity and its efficient metering of the conductive carbon black into the melt we are able to achieve high output rates.

Above all, however, we can now benefit from the high quality of compound achieved with this twin screw extruder’s excellent mixing behavior. And in the long term we shall also benefit from the ZSK’s modular design: with only a minimum of expenditure it can be readily configured for any application, which means that we are well equipped for any changes or new developments in the market for a long time to come.”
Read more: Extrusion machines 159 Machines 479