2013-07-29
Tweet
Premiere: electric Allrounder R 820 A
Among the injection moulding machines, the electric Allrounder 820 A, which completes the high-end electric Alldrive machine series, will celebrate its world premiere in Düsseldorf. Both the 4,000 kN toggle-type clamping unit and the size 2100 electric injection unit have been newly developed for this machine. The gap between 3,200 and 5,000 kN in the electric clamping unit range has thus been closed. The same applies to the high-performance hybrid Hidrive range, for which this new toggle size will also be available in future. With the new clamping force and injection unit sizes for electric machines, the modularity of the Arburg range has been further enhanced, offering customers the option of adapting their Allrounders even more precisely to the relevant application and product, further increasing efficiency. 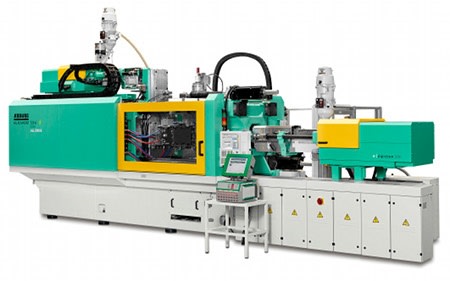 Premiere: six-axis robotic system suspended on linear axis
For the automation segment, Arburg will jointly present a world innovation with its cooperation partner fpt Robotik in the form of an Agilus six axis robotic system from Kuka with integrated Selogica user interface. The system is suspended from a linear axis arranged transversely to the machine. The combination of a six-axis robotic system with a linear axis permits more dynamic movements and faster entry into the mould. This results in shorter cycle times and higher productivity. A further benefit of this mobile solution is the greater working area available as the small robotic system can move on the axis and the floorspace below can be used without restriction. The Agilus robotic system can thus perform a wide variety of moulded part production tasks. In terms of size and performance, it is designed for load weights between 6 and 10 kg - ideal for plastics processing requirements, making it a cost-effective handling solution.

Application highlight: Particle-foam Composite Injection Moulding
The new automation solution will be presented on a two-component Allrounder 470 S, on which the further development of Particle-foam Composite Injection Moulding (PCIM) will be presented. This relatively new process, which was developed jointly by Ruch Novaplast, Krallmann and Arburg, opens up completely new possibilities in lightweight construction. On the exhibition machine at the K, a plastic wheel rim is injected onto an inserted particle-foam tyre. Transfer of the pre-moulded part to the mould is followed by overmoulding of the tyre with TPE. The six-axis robotic system performs all the necessary handling tasks, from insertion of the foamed tyre through to transfer of the finished parts to the packaging system, which features printing of the bags during the running process.