Wasteful World: How much of our belongings are we really using?

2018-08-14
German version Polish version
Relocation experts Movinga have released a powerful study revealing the collective delusion we face as a society when it comes to hoarding and waste. Formed as part of a larger study on relocation trends to be released later this year, Movinga conducted a poll among 18 000 heads of households in 20 countries compared individual’s perception on how much they own versus how much they actually use to reveal the level of cognitive dissonance we live in. The results revealed that individuals are unable to perceive their own part in the global issues we face in terms of over consumption and waste generation, and Movinga hopes this study can raise consciousness and spark a discussion on how we do our part to help.

“At Movinga, we are personally invested in ways to make the moving process more effective and less stressful for our customers, however we are becoming increasingly aware of our responsibility towards the world we live in.” Says Glenn Miotke at Movinga. “With the oceans becoming ever more polluted with plastic, and the fast fashion industry bigger than ever, it’s time to start encouraging individuals to really consider whether they really need more.”

Since your most recent move, what percentage of your transferred belongings are still not in use? We then collated the responses with data from the World Bank and other scholarly studies on the topic.

The full study allows the responses to be filtered based on these categories for a more in-depth exploration of the findings. You can find the original tables on Movinga’s website: https://www.movinga.de/en/wasteful-world-delusion-reality. 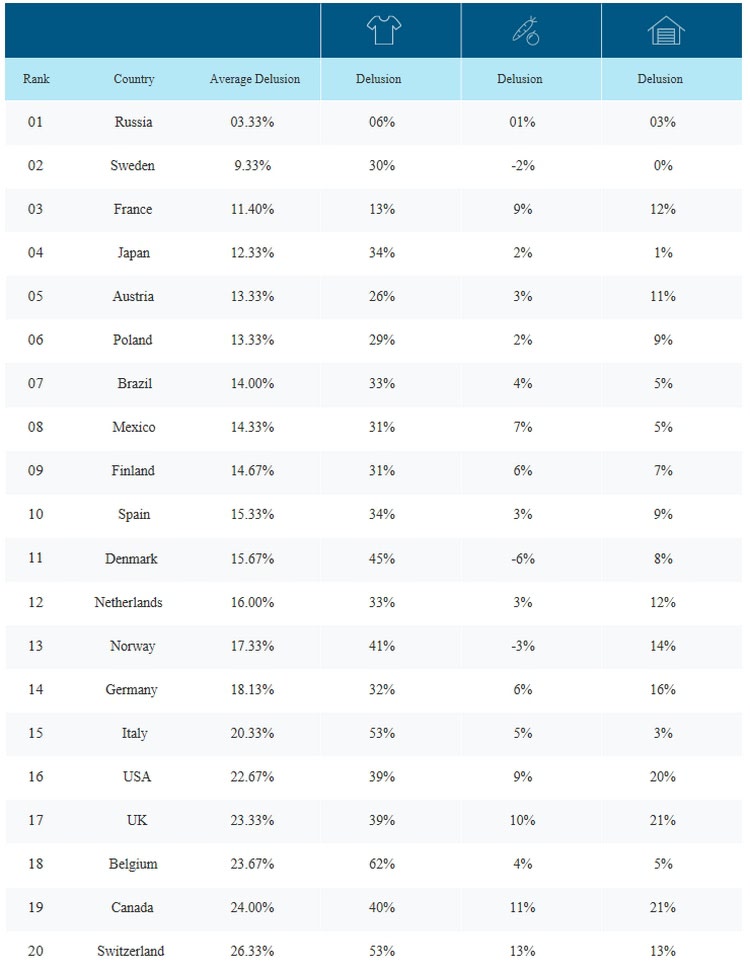 We encourage anyone reading this study to take a closer look at the way their homes are organised.” Says Glenn Miotke at Movinga “There are plenty of local initiatives, such as Freecycle or charity shops, where people can give away objects they no longer need to those who do. This means less waste is produced and a less cluttered, more functional home.”

Findings include:
Belgium has the highest delusion percentage for clothing at 62% (they thought they hadn’t worn 26% of their wardrobe in the last year but they actually hadn’t worn 88%) , and Russia has the lowest at 6% (47%; 53%).

The UK has the highest level of delusion when it came to belongings in use after moving at 21% (they thought 10%, the reality was 31%), and Sweden has the lowest at 0% (they thought 12%, and they were correct).

The USA has the highest levels of actual food waste with 24% of their weekly shop going to waste each week, the highest levels of unused belongings (35%), and the second highest percentage of unworn clothes (82%).
Read more:
Sustainability 297
Plastics goods 58
Interesting details 41
Research 75