2011-03-01
Tweet
“Cube mould” on Allrounder machines
In cooperation with its partner Foboha, Arburg will demonstrate cube mould technology on an innovative solution for a continuous, high-speed production process. A hydraulic two-component Allrounder 630 S with a clamping force of 2,500 kN and size 1300 and 400 injection units will be used at the fair to produce caps for water bottles.

The smaller of the two injection units is mounted on the moving mounting platen. The sliding unit for the central section of the cube mould operates indepen¬dently in the machine base. This allows mould opening to be adjusted flexibly, enhancing process reliability and optimising cycle times through inde¬pendent machine movements.
The Foboha mould used has eight cavities on each of its four sides. This means that it can complete 32 individual production steps simultaneously. It moves to four stations in succession.

The preform is produ¬ced in the first station and cooled in the second after the mould has been rotated through 90 degrees by a servo-electrically driven movement. A further 90-degree rotation brings the preforms to the third station, where the second component is injected. In the fourth station, which is reached through the final 90-degree rotation, the finished parts are demoulded free-falling by means of core pulls with the mould closed, allowing the injection moulding process to continue. Eight preforms and eight water bottle caps are produced during each cycle. 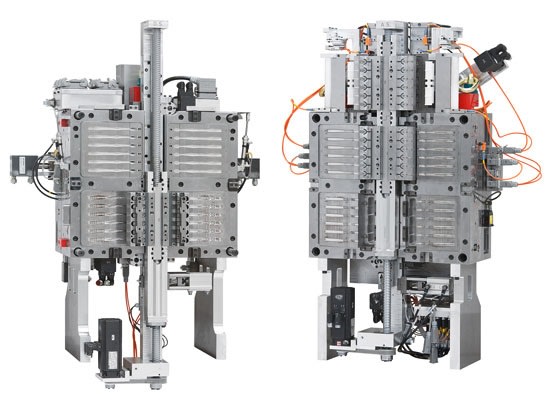 Selogica controls all processes
The Selogica machine control system ensures the smooth, effective programming of all combined injection moulding and handling processes. All mould functions are fully integrated in the Selogica system and can be flexibly programmed in the same way as additional machine axes. The movement sequences are perfectly coordinated and comprehensively synchronised through the individual selection of start conditions. The injection units are combined in a central sequence, enabling the operator to maintain direct control of all processing parameters. This renders complex processes transparent, while simply and reliably ensuring smooth production thanks to a clear and intuitive human/machine dialogue.

Innovative technology with attractive benefits
The sophisticated Foboha stack-turning technology has significant advantages, particularly with regard to cycle-time reductions. Not only can multi-component parts be produced rapidly at a high quality level, they can also be demoulded during the running produc¬tion cycle. Highly complex parts can be produced on a single machine. Because injection is performed simultaneously into two parting lines, cube mould technology permits production at half the clamping force and with twice the number of cavities. This brings considerable time and cost benefits, particu¬larly during high-volume production.