2011-01-24
Tweet
According to United Nations estimates, over 9 billion people will be living on Earth by the year 2050. The amount of arable land needed to feed them, however, will not increase at the same rate. Inexpensive greenhouses made from plastic film represent one way to solve this problem: With the aid of such greenhouses, the output per hectare can be increased considerably.

A new light stabilizer that BASF launched at the K show after six years of development can help improve these greenhouses and make them even more effective: Tinuvin XT 200 protects film made from thermoplastic resins against overly fast degradation when exposed to UV light. This economical additive ensures the efficacy of these films over a longer period of time even in the presence of severe concentrations of agricultural chemicals like elemental sulfur. Thus Tinuvin XT 200 fills a gap in the BASF portfolio of light stabilizers for resins used in agriculture.

As a result of urban growth, but also because of increased erosion and climate change, the amount of arable land is decreasing. The challenge is how to increase the intensity of agricultural activity while keeping the products affordable. Greenhouses that can be erected very inexpensively through the use of plastic film are one possible way out of this dilemma: They provide an ideal environment for plants, protect vegetables from the effects of frost, wind and rain, ensure uniformly high quality and help fruit ripen faster. In this way, several crops can be harvested in one year. Moreover, modern plastic film can be tailored specifically to the unique light and temperature requirements of many field-grown fruits. At the same time, they help to use water more economically – a resource that has to be looked after even more closely in the coming years. 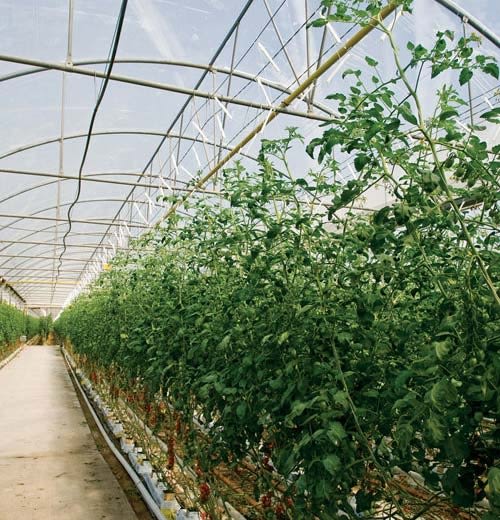 The benefits of greenhouse production are so convincing that vegetables such as tomatoes, peppers, cucumbers and eggplants are already being cultivated largely under polyolefin roofs. In 2009, about 900,000 tons of plastic film for greenhouses were produced worldwide, covering about 800,000 hectares of arable land. This corresponds approximately to the total area covered by the cities of Tokyo, Mexico City, Madrid, Johannesburg, Rome, Moscow and Berlin together. At the same time, the demand for agricultural film for use in greenhouses is foreseen to grow at an annual rate of about four percent. The most important markets are found in the Mediterranean region. Other fast growing greenhouse areas in the world are Asia, South America and Eastern Africa.

Optimized agriculture also includes carefully considered use of agricultural chemicals to prevent harvests from attack by pests or mold. Environmentally friendly solutions are advancing on this front as well. The use of sulfur, for instance, being approved for application on organic produce even in highly regulated German agriculture, is recording noteworthy growth. However, the use of elemental sulfur and other agricultural chemicals places special demands on the film used in greenhouses.
The reason for this lies in the sensitivity of thermoplastic films to UV light. This energy-rich radiation causes plastics to become brittle over the course of time via a complex, multi-step chemical mechanism. Low-cost, thin film in particular, can become useless after only a few weeks of exposure to the open sky as a result of this effect. Polymer chemistry has, of course, already developed additives that can slow this degradation reaction. However, their suitability for use in agricultural film is rather limited, since their effectiveness is reduced considerably by sulfur and acids stemming from the wooden or iron construction of greenhouses. Halogen-containing chemicals can also contribute to the deactivation of common UV stabilizers.

There are, however, already alternatives in the BASF light stabilizer portfolio, specifically for the agricultural sector. Light stabilizers recommended depending on the amount of agricultural chemicals used are, for example, Tinuvin NOR 371, a powerful high-end product on the market since 2001, but also Tinuvin 494, Tinuvin 111 as well as Chimassorb 2020 and 944. The new Tinuvin XT 200 operates in a range that for technical reasons cannot be served by Tinuvin 494 and for economic reasons cannot be served by Tinuvin NOR 371. This gap in the BASF-line of additives is now filled.

Through use of Tinuvin XT 200 it is possible to produce in a very economical manner LDPE (Low-density polyethylene) films that withstand severe agricultural chemicals levels and also assure a service life of two and more years even under intense sunlight. The performance of such stabilized films is also very good when in contact with wood and metal greenhouse structures. Without a light stabilizer, they would not last even one growing cycle.

The capabilities of the new UV stabilizer were verified by extensive testing at Ciba/BASF over several years. This testing involved not only highly specialized laboratories but also experimental greenhouses at the large BASF development center for light stabilizers for agricultural plastics in Bologna, Italy. After the aging characteristics of the stabilized film were investigated in detail in the laboratory, they also had to prove themselves in extended field tests in Italy and Spain. Now the new stabilizer has the opportunity to grow along with a dynamic market.
Read more: Additives 149 Ecology 116