The MacroPower series project was first announced at the opening of the new Wittmann Battenfeld sales and service centre in Meinerzhagen, Germany last September, and the MacroPower 800 machine with injection units in sizes 3400, 5100 and 8800 will be available from July. 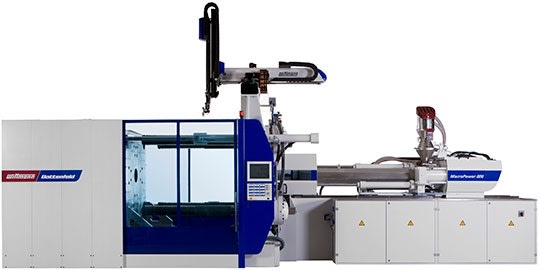 One advantage of the MacroPower range is a small footprint, said Lechner, as the 8.7m length of the MacroPower 800, for example, is shorter than the 9.2m and 10.3m lengths of machines from two competing producers. Similarly, the MacroPower 1000 measures 10.1m compared to the 10.6m and 11.3m of other machines on the market, he added.

The company highlighted how moulds may be mounted on the MacroPower system by an over head crane, larger moulds being divided and slanted as they are introduced into the mould area.

“In most cases a mould can be put into the machine without moving the one upper tiebar that is retractable,” said managing director Georg Tinschert. Tinschert also pointed out the linear bearing guides for the moving platen, which he claims reduces energy use.

The retracting tiebar feature is a less complex design than with the earlier design HM series large 2-platen Battenfeld HM machines, which have retractable tiebars that all have to be rotated and locked, he added.

The MacroPower series project was first announced at the opening of the new Wittmann Battenfeld sales and service centre in Meinerzhagen, Germany, last September. In the longer term, the MacroPower will eventually replace the present HM range, said Tinschert.

Following introduction of the MacroPower 800 as the first in a series of machines that will reach a clamping force of 1,600 tonnes, a 1,000-tonne machine will be shown at the K 2010 fair in October.
Read more: Injection moulding press/machines 602