2017-02-02
Tweet
Polyvinyl alcohol (PVAL) is a plastic material little known so far. It offers the outstanding attribute of solubility in water with simultaneous high resistance to most contact chemicals. PVAL has been little known until recently, primarily because it could only be processed into film, but manufacturing injection-molded parts from it was not possible. The reason was its large variation in characteristic material values due to batch production. This changed, however, with the solutions discovered by the Austro-Polish injection molding company Buzek Plastic, which developed over a period of 10 years and in several evolutionary steps a mass production technology for making water-soluble, multi-chamber laundry detergent containers, of which it is now producing 1.3 billion units per year. The machinery and automation technology for this purpose have been supplied by Wittmann Battenfeld.

Polyvinyl alcohol (PVAL) was first produced in 1924 by the German chemists Wilhelm Hermann and Wolfram Hähnel and is thus one of the oldest types of plastic material. It is interesting to note in this connection that PVAL cannot be obtained directly from the vinyl alcohol monomer, but only by way of a hydrolytic reaction (also known as saponification) with sodium hydroxide from the even more ancient plastic material polyvinyl acetate (PVAC), which the chemist Fritz Klatte, also from Germany, had already produced for the first time in 1913. Just as interesting is the fact that both these plastic materials, although directly related to each other, have different attributes. Polyvinyl acetate is insoluble in water, butanol, diethyl ether, petroleum ether and aliphatic hydrocarbons, but soluble in low alcohol concentrations, numerous ketones, esters, cyclical ethers, and aromatic and chlorinated hydrocarbons. Polyvinyl alcohol is totally different: it is water soluble, but resistant to most anhydrous organic solvents.

Polyvinyl alcohol production can be controlled with the result of PVAC being transformed either entirely or only partly into PVAL. The more residual acetate the polyvinyl alcohol still contains, the lower its solubility in water. The varying acetate content also causes variations in melting point, melt viscosity and processing parameters. While the melting point for fully hydrolyzed PVAL is about 230°C, it ranges from 180 to 200°C for partly hydrolyzed types. The density ranges from 1.21 to 1.31 g/cm3, depending on the type of material.

What both plastic materials have in common compared to other plastic materials, is the shorter length of their polymer chains. It ranges from 100 to 5000 and fluctuates from one batch to the next, depending on process conditions. The resulting mechanical properties of PVAL also depend on its water content, since water diffused into it acts as a softening agent. Therefore PVAL loses some of its tensile strength but gains in elasticity with high atmospheric humidity.

Moreover, PVAL is an excellent film formation agent with good wetting properties. Consequently, watery solutions are processed as ingredients for glues or adhesives and for thickeners in hair sprays or shampoos. They are also used as additives in paper processing, or as mold release agents in the production of fiber composite parts, which can subsequently be rinsed off. In PET bottle production, PVAL is used as a CO2 barrier layer. It is also quite common in film production, for example for packaging bags intended to be dissolved. Somewhat more exotic are forensic applications, where pads with layers of PVAL are used to track traces of gunpowder.

Throughout its history of almost a century, polyvinyl alcohol melt has hardly ever or never been processed by injection molding. The main reasons were a lack of product ideas as well as fluctuations in material key figures by up to plus/minus 20 per cent.

This was the starting point in 2003, when a multi-national chemical company made an enquiry at Buzek Kunststoffverarbeitung in Austria about production equipment to manufacture injection-molded single portion packages for dishwashing granulate. Andreas Huber, Managing Director and CEO of Buzek Holding GmbH in Austria and Buzek Plastic Poland, recalls: “New technical challenges in terms of injection molding processes have always fascinated me. Here, the foundation was laid while I was still Product Manager for Special Materials at Battenfeld. I could hardly believe that nobody had yet succeeded in manufacturing mass-produced parts from polyvinyl alcohol. This only became clear to me after the first plasticizing tests, for the results were very similar to wallpaper paste. So the material stuck firmly to the mold. It is not surprising that polyvinyl alcohol is found in every paper glue. Now I knew that the road to series production would be a long one. But on the other hand, I also suspected that if we succeeded, the product would have an enormous potential. So today, I am very glad that my business partner Günter Buzek and I were also able to gain the cooperation of the Battenfeld management for this project. Their giving it the green light meant that we were jointly able to start the systematic development of an appropriate application technology.”

Following several preliminary tests, a low-viscosity type of PVAL originally developed for the paper industry emerged as the basis for an injection-moldable type of feedstock. It was the starting point from which a material compound which could be processed was developed in an iterative series of tests with various auxiliary additives for processing. Once this compound had been created, the company successfully produced the thin-walled 30 x 40 x 15 mm container (Fig.1) first with a single-cavity mold, then a 4-cavity and finally a 12-cavity mold. Tests at the Battenfeld technical lab on the all-electric injection molding machine models BA 1000/500 CDK-SE and EM 1600/350 revealed that fast injection and high-precision injection pressure control would bring about the break-through, even though reject rates of about 15 to 20 per cent still had to be accepted, due to batch-related fluctuations in material data. 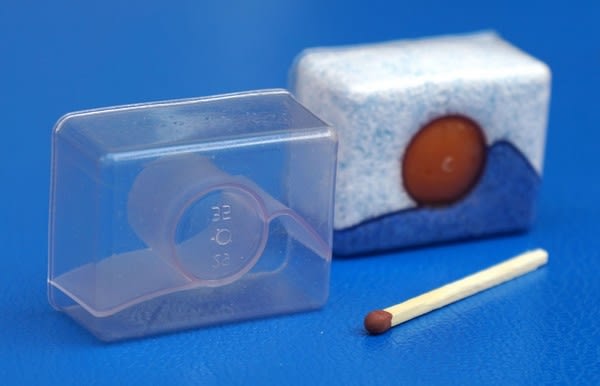