As proof, Mecaplast has used a TPO compound containing a mix of talc and Hyperform HPR-803i (total additive content around 10% by weight) to mould prototype B-pillar covers that it normally supplies in a conventional 20% talc-filled TPO (elastomer-modified polypropylene). The prototype parts weighed 524 g, seven percent less than the commercial parts. The compound has a density of 0.98 g/cm3, which compares with 1.04 g/cm3 for a 20% talc-filled TPO with similar mechanical properties.

Nathalie Samson-Maguet, Mecaplast’s Research & Innovation Manager, says its final product costs are exactly the same: Hyperform HPR-803i costs more than talc, but this is cancelled out by the reduced total material requirement. The compound is produced by Inno-Comp in Hungary.

Nathalie Samson-Maguet says that for a typical C-segment car, use of compounds containing Hyperform HPR-803i in these parts alone could yield a total weight saving of at least 225 g, leading to a potential reduction in carbon dioxide emissions of 0.022 g/km. 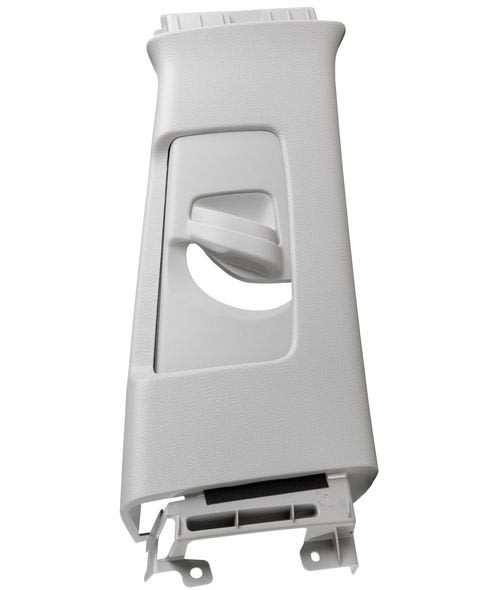 In other words, just one typical driver covering 20,000 km in a year would save 440 g of CO2, – and in a country like Germany that has some 40 million cars on its roads, the total saving could be measured in thousands of tonnes. (Further savings could be achieved with the use of such compounds in the production of larger parts, such as instrument panels, which Mecaplast does not produce.) This is very important, given the pressure being put on car makers to reduce emissions from their vehicles.

The EU recently set new standards for CO2 emissions for cars. It has set a maximum of 120g/km on average by the end of this year, with a further reduction to 95g/km on average by 2020. Lightweighting will be an important weapon for auto makers in helping them achieve these targets.

Mecaplast is aiming to go into production with TPO parts reinforced with Hyperform HPR-803i within the next two years. The company makes parts for several major car companies, including BMW, Citroen, General Motors, Peugeot, Renault, Toyota, and Volkswagen. According to Nathalie Samson-Maguet, Mecaplast is also developing a new process, still confidential, that will yield Hyperform reinforced TPO interior and exterior parts between 35 and 40% lighter than current versions.

In addition to reducing part weight, Hyperform HPR-803i improves scratch resistance. This is important as the B-pillar covers are normally installed in the car unpainted, and get their colour from masterbatch.
Read more: Additives 149