2018-02-06
Following introduction of its new compact TEX34αIII high-performance compounding extruder at the October 2017 IPF International Plastics Fair in Tokyo, JSW now announces the TEX34αIII debut in the European market too, as an extruder for various applications such as compounding, chemical reaction, dewatering, devolatilizing and so on.

The TEX34αIII model replaces the slightly smaller TEX30α small-lot extruder, and its screw diameter is 36 mm. The extruder’s exceptionally high torque density (18.2 Nm/cm3) enables effective yet gentle compounding at low screw speed and optimally low temperature, but without detriment to throughput. Should torque rise to an unacceptably high level, a torque limiting function protects the machine by disengaging the drive motor and gearbox, so that the screw stops rotating.

Throughput typically reaches up to 500 kg/h in talc-filled polypropylene, 250 kg/h in masterbatch compounding and 150 kg/h with polymer blends such as ABS and ABS/PC, etc., a worldwide highest performance level for such a compact compounding extruder of this size.

The TEX34αIII also excels with its conventional yet convenient EZ easy-change tie-bar system, which makes changing barrels easier than in the past.

Depending on customer needs, JSW offers the TEX34αIII with a choice of the standard version model and an ultra-compact version with its control cabinet built-in within the footprint of the machine frame, saving space and installation time. The very small footprint TEX34αIII-52.5BW-2V model with its integrated control system has the following approximate dimensions and weight: 4,250 mm length, 1,250 mm width (incl. the inverter panel), 1,200 mm center height and 3,500 kg weight.

Although specifications and performance of both versions are identical, Jun Kakizaki, General Manager at JSW Europe GmbH in Düsseldorf says “The standard model has a separate control cabinet, because sometimes customers prefer to have the control cabinet in a separate room in order to protect them from e.g. dust during heavy-duty operation. The ultra-compact model is however designed for laboratory applications, where space may be limited”.

While the ultra-compact version does not easily lend itself to customization for individual needs, the standard model can be easily customized, e.g. by provision of a multiple number of vents, adjustment of L/D ratio with screws of different lengths and increasing screw speed by choosing to use one of three drive motors with different performance levels, or even modification to permit explosion-proof operation in hazardous environments.

JSW also has many lineups of original developed special devices to increase the capability of TEX34αIII. Customers can choose optimum devices from the lineup in order to improve their production and quality of product.

JSW’s NIC (Nikko Intensive Cylinder) mixing barrels have longitudinal grooves on the inside of each barrel, which benefits mixing performance by allowing more polymer to pass through the larger gap between the depth of the grooves and the screw. The associated lower shear rate enables lower temperature mixing and avoids local heat build-up, to the benefit of compound quality and reducing energy consumption by 10-20% compared with standard non-grooved barrels. 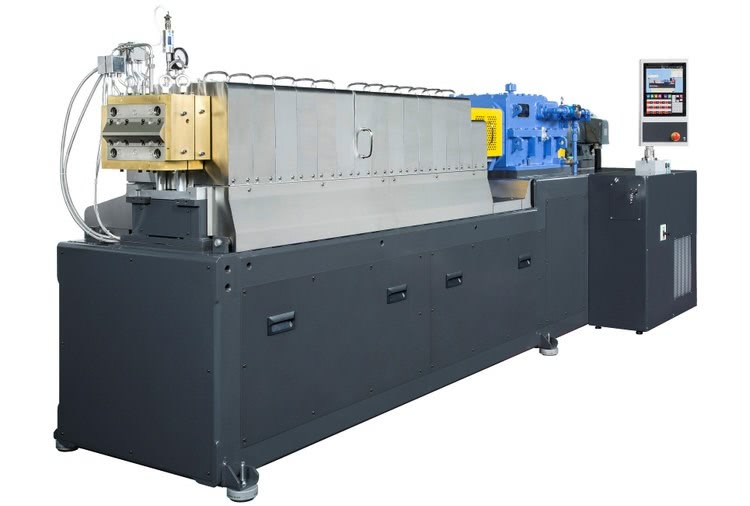