2016-02-01
Materials manufacturer Covestro is testing an innovative and environmentally friendly process for recycling saline process wastewater in plastics production. A pilot plant for the process at the Krefeld-Uerdingen site in Germany was opened on Friday by Federal Minister for the Environment, Dr. Barbara Hendricks. The new technology reduces the salt levels in waters such as the Rhine and conserves potable water resources. It is being used in the production of polycarbonate, a high-performance plastic required in many sectors, including automotive engineering, electronics and medical technology.

The German Federal Ministry for the Environment has provided some EUR 740,000 in funding to support the project as an outstanding example of how a closed-cycle approach can be put into practice in industry. The total cost of investment is around EUR 3.7 million.

During the opening ceremony, Dr. Markus Steilemann, Head of Innovation at Covestro, explained that by taking this step the company is once again demonstrating its capacity and will to use new processes to help conserve resources and protect the environment. "The generous support from the federal government encourages us to remain diligent in our efforts to develop sustainable technologies and products."

Dr. Klaus Jaeger, site manager for the Covestro plants in North-Rhine Westphalia (NRW), highlighted the huge importance of material lifecycles for the company. "The new process reinforces our network structure at the key Krefeld-Uerdingen site, as it benefits all production operations here," said the NRW boss.

The current project at Covestro marks the first time in Germany that saline industrial wastewater has been recycled at an industrial pilot plant. Pretreated salt water such as this is usually released into waterways, specifically the Rhine, which runs directly along the site. Thanks to the new plant, some of this wastewater can now be used in an electrolysis process to manufacture chlorine. Chlorine itself is one of the key raw materials for producing polycarbonate and other plastics.

The new process helps save up to 30,000 metric tons of salt and 400,000 metric tons of fully desalinated water in chlor-alkali electrolysis every year. That corresponds to the avoidance of emissions totaling 6,200 metric tons of CO2 equivalents annually. Every hour, the process stops up to 70 cubic meters of saline wastewater from being released into the Rhine, thereby protecting a similar quantity of potable water resources.

Covestro has already optimized chlor-alkali electrolysis by using energy-saving processes. For example, the oxygen depolarized cathode technology jointly developed by the company helps reduce energy consumption by a further 30 percent compared to the standard process. If all chlorine producers in Germany were to employ this market-ready process, the country's total electricity consumption would be reduced by one percent. That roughly corresponds to the annual energy consumption of a large city such as Cologne.

Polycarbonate production has a long history at the Krefeld-Uerdingen site, where Covestro employs approximately 1,100 people. Chemist Dr. Hermann Schnell discovered the polycarbonate Makrolon there in 1953. Industrial production of the material began five years later, and Covestro continues to market it globally today. 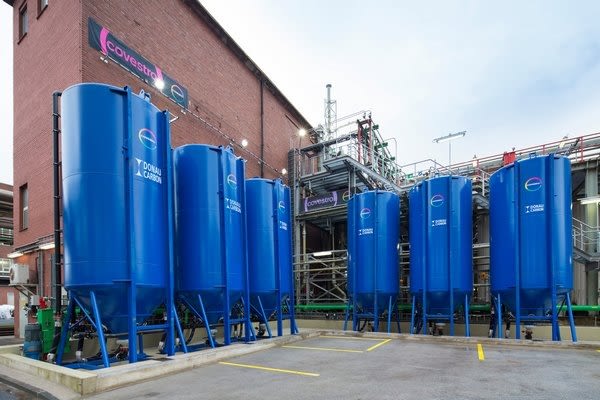