2011-09-08
Tweet
For about a year now, Volkswagen Plastics Technology has been using the CO2 snow jet technique developed by acp to clean interior components before painting.

Apart from aiming to improve quality, the main reasons behind the investment were cost-efficiency, sustainability, ease of automation and the low space requirements of the cleaning system. The process also enables high-gloss injection molded components to be cleaned gently and efficiently before a single layer of metallic paint is applied.

A corporate philosophy of the Volkswagen concern is to increase sustainability and cost-efficiency as well as to constantly improve quality and work conditions. The development and manufacture of interior components such as panels, trims, ventilation grilles and air diffusers at Volkswagen Plastics Technology, which no longer need to be painted or only require the application of a single layer of paint, are additional factors.

One of the components produced is a decorative panel made of ABS-PC blend (ABS - Acrylonitrile-Butadiene-Styrene, PC – Polycarbonate). Although the part already has a high-gloss surface on leaving the injection-molding machine, it is subsequently coated with a layer of high-gloss metallic paint to give it a sophisticated finish.

As the paint is applied without an undercoat, the tiniest dust particles or water marks would cause rejects. Thus a cleaning solution was needed which was not only fast, economical and reproducible, but also dry and gentle on materials. At the same time, the cleaning system had to fit into a small space and be integrable into the painting process. 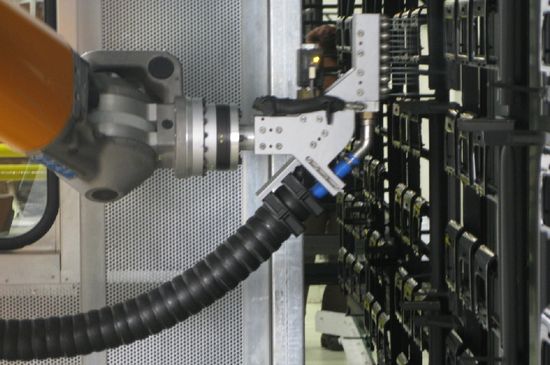 These demands could be fulfilled by the dry, environmentally-neutral CO2 snow jet technology from acp – advanced clean production GmbH. Extensive series of tests on high-gloss components and “conventional” plastic parts showed that the cleaning process was capable of attaining the level of cleanliness required to pre-treat the entire spectrum of components to be painted.

In contrast with a CO2 dry-ice jet, the cleaning technique uses liquid carbon dioxide as a medium which is stored in tanks at Volkswagen Plastics Technology. Produced as a by-product in the chemical industry, it is environmentally neutral and gentle on resources.

Thanks to the supersonic two-component ring nozzle located in the compact cleaning head, the modularly-constructed CO2 snow jet system manufactured by the Esslingen-based company has a high cleaning power despite relatively low carbon dioxide requirements. Liquid carbon dioxide expands on exiting the nozzle to form a mixture of snow and gas which is the core jet.

Oil-free compressed air is fed to the core jet as a jacketed jet, accelerating the non-toxic, non-combustible snow crystals to supersonic speed. When the easily-focused jet impacts on the surface of a component, the combination of mechanical, chemical and thermal forces cleans off particulate and filmy contamination without leaving any residues. In the process, the low degree of hardness of the tiny non-abrasive snow crystals ensures that even high-gloss surfaces keep their quality and remain undamaged during cleaning.

The project managers at Volkswagen and acp developed a customized system configuration in line with the range of components produced at Plastics Technology in Braunschweig. It is made up of a nozzle array containing seven cleaning nozzles and controlled by a robot.

Workpiece-specific cleaning programs are filed for each of the approximately 20 different interior components which need to be cleaned. The cleaning system has been integrated into a booth fitted with a continuous extraction unit. This prevents cleaned parts from becoming recontaminated by dirt which has been removed.

The CO2 snow jet system has been running in three-shift series operation at the Volkswagen works in Braunschweig since August 2010. Several thousand plastic parts are cleaned by it every day. Apart from the advantages of the cost-benefit comparison and a higher, reproducible cleaning quality, the CO2 snow jet cleaning has also enabled reject rates to be lowered by around 3%.
Read more: Automotive 245