2018-08-27
German version
In today's plastics processing industry - and particularly in automatic injection molding - the demand for conditions promoting cost-efficient production is an ongoing issue. This demand applies to the entire range of different applications, from simple parts removal all the way to complex automation of inserts or shifting of parts inside the mold. In the course of producing the new R9 TeachBox, Wittmann, too, was now faced with precisely this type of challenge.

In 2017, Wittmann already presented the new R9 robot control system to the public at that year’s Fakuma trade fair. In order to become a worthy successor to its extremely successful predecessor model R8, R9 had to fulfill several different requirements. Operating terminals for industrial use must meet numerous criteria. For example, safe operation must be ensured even when the appliance is soiled, high temperatures or major fluctuations in temperature must not cause any problems, and maximum flexibility must be combined with the greatest possible robustness.

The design of the new Wittmann TeachBox for the R9 series is definitely geared to meeting this demand, which is why the control system has been implemented in a special 2-component version. A frame made of an ASA/PC blend provides the TeachBox with a large, solid base for its 10.1" touch-screen, which guarantees minimal warpage even with strong temperature fluctuations, and consequently safe and comfortable operation. This frame is surrounded by a protective edge made of TPU, which shields the TeachBox reliably even from heavy blows. The control system is ergonomically designed, and with its total weight of less than 1,500 grams it is genuine lightweight. In this way, it supports fatigue-free work even over long periods of time.

The frame for the R9 TeachBox is manufactured on a 2-component SmartPower 240/750H/210S injection molding machine from Wittmann Battenfeld, using a 2-cavity mold.
Moving the preform injection-molded in cavity No. 1 into cavity No. 2 is carried out by a robot. The robot used in this sophisticated injection molding process is a new Wittmann WX142 model with an R9 control system equipped with a multi-station gripper. 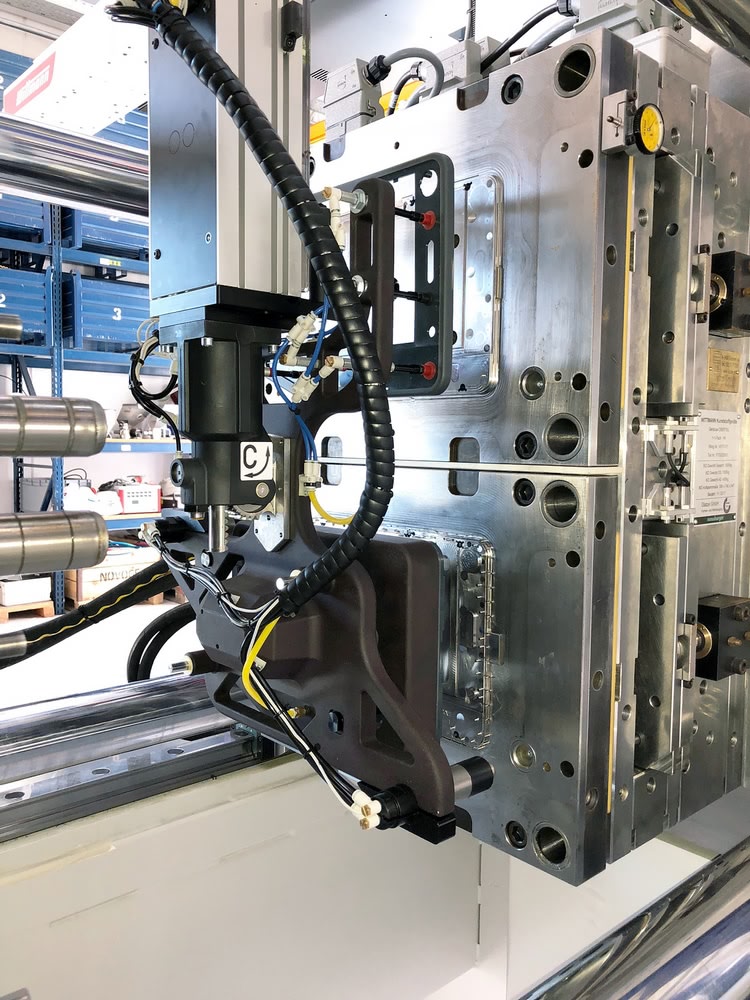 The gripper's first station removes the finished part from the second cavity, before the second gripper station takes the preform out of the first cavity and transfers it to the second cavity. The insertion of the preform is carried out with the help of centering pins on the relevant gripper component to ensure accurate positioning with simultaneous application of force.

Automation through WX142 with R9

The WX142 has a maximum load capacity of 35 kg and is normally used on injection molding machines with up to 500 tons clamping force.
Not only does this production cell manufacture the plastic frame of the R9 TeachBox, but it also uses the newly developed functions of this control system itself. So the robot is fully integrated in the processing machine, and unlimited control of the appliance is possible via the injection molding machine's standard B8 operating terminal.
Simplification of the programming process is achieved by using the new appliance group functionality. Through the use of this grouping function, any gripper and vacuum circuits which belong together are addressed simultaneously by a single command, which considerably simplifies the activation and deactivation program for the two gripper stations. The operator only needs to activate or deactivate the relevant established groups of appliances.

Another important functionality is the digital robot twin, which is available with the R9 control system as standard and is able to realize a virtual validation of the processes to be carried out by the robot at any time – without exposing the processing machine and the robot to any risk. Based on the programmed sequences, the control system generates a virtual production cell, whose visualization can be zoomed in or out, with a freely selectable perspective which can be altered at any time. This means that the actual production cell and the robot are accompanied by a digital copy (twin) in the control system. 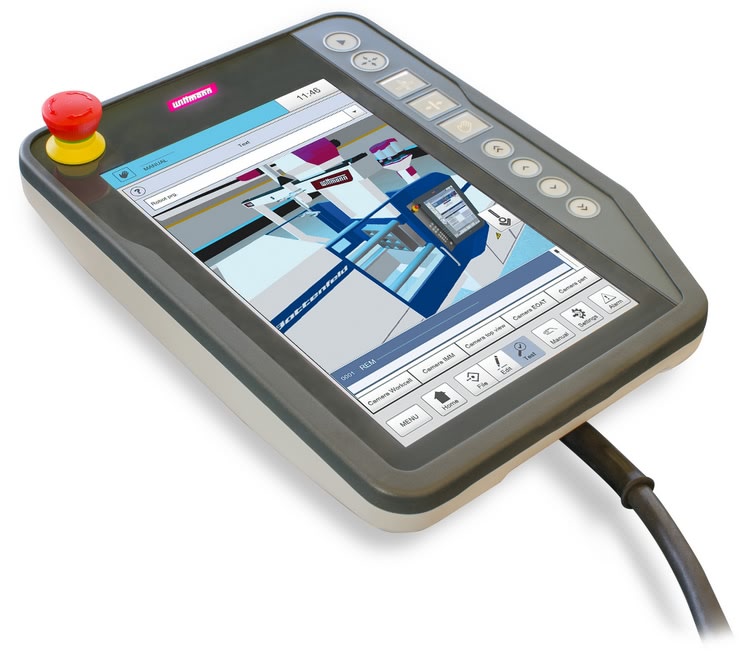 This twin has the same attributes and characteristics as the equipment existing in reality and consequently makes it possible to simulate the application-specific processes. As soon as the relevant parts of a robot program have been completed, it is possible to change into the simulation mode via the test menu of the control system. This mode also permits simulation of the injection molding machine on the basis of recorded variables. Highly complex movement sequences, which could lead to a collision of the robot with the protective enclosure or the tie-bars of the injection molding machine, thus lose their “terror” in programming. In addition to using the digital twin on the R9 control system, it can also be started on a PC.