100% film made from post-consumer waste

2014-08-29
Tweet
For the production of film made from post-consumer waste, Herbold Meckesheim GmbH in cooperation with Erema has designed a model plant for Poligroup in Bulgaria, in operation since September 2013. High quality film is produced there, partly with thicknesses down to 30 my made from plastic waste only. This mix consists of LDPE film waste from agriculture as it is used in crop forcing or silage film. A further component comprises LLDPE film waste also coming from the agrarian sector, e.g. for wrapping bales. A third component is film from household waste arising in automatic sorting plants. Why this film mix? The principal material is LDPE from agriculture that, to a large extent, forms a homogeneous material with an unchanging melt flow index (MFI). The LLDPE improves the physical properties, and films from household waste are particularly well-priced materials available on the market.

Film from household waste is a different case. It is a mix of several different plastics. The real challenge here is the separation of unwanted plastics. In order to achieve this task Herbold is the only operator in the field of wet film recycling who opts for a separation by means of a hydro-cyclone separation step. Plastics that are heavier than water will be separated from plastics that are lighter than water. This process ensures that heavier plastic components can be separated from the polyolefin, which is the good material of a film washing plant.

A further advantage of the hydro-cyclone separation step is the high amount of water present in the water circuit, ensuring together with the revolving forces arising due to the hydro-cyclone, a very good washing result of the films. Deposits of organic substances, a frequent feature of film from household waste, are easily removed by washing. In contrast, films from supermarkets often have a high percentage of paper in the form of affixed labels. It is a real challenge to separate this paper from the film since these LLDPE films from supermarkets are ideal as a feeding material for recyclate used for the production of new film. 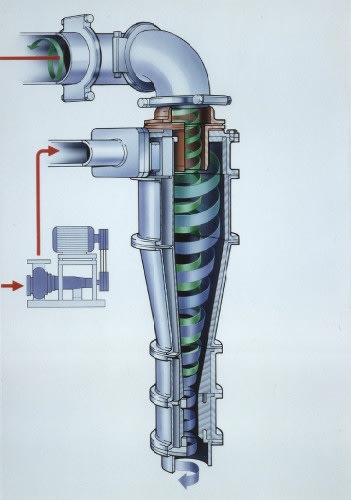 The most important question is the one concerning the required quality of the end product. From this question the necessary recycling steps will depend. Economically speaking, only certain waste can be used for recycling. Operators increasingly turn to materials that are available on the market for a very reasonable price. That is one of the reasons why plant manufacturer and operator should work hand in hand. The more precise the specification of the input material is, the more cost-efficient the design of the plant can be since unnecessary process steps or room for misinterpretation can be avoided. The operator of a washing plant will also have to find a solution for the collection of film waste.