2017-03-01
Polish version
The European market for fibre-reinforced plastics/composites has been growing steadily for a number of years now (source: AVK/CCeV Market Report 2016). However, there have also been major differences, depending on the segment. Growth rates differ, sometimes substantially, from one region or country to another and also with regard to manufacturing processes. Some segments are even in decline.

Where regions are concerned, strong growth has been especially noticeable on the German market in recent years. Whereas 10 years ago Germany’s market share in the biggest composites segment – glass-fibre reinforced plastics (GRP) – was around 13%, and by 2016 it had reached 20% (see Fig. 1: Development of GRP production in kilotonnes). Other regions and countries have experienced significant losses in market shares. 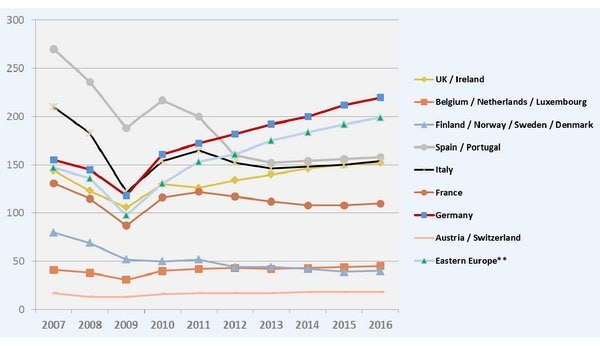 These differences, some of them considerable, can be explained by major variations in the predominant use of composites in each country. For example, in countries where most of the volume has always flown – and is continuing to flow – into state-subsidised infrastructure projects, there has been a far greater impact from cost pressure and negative economic developments than in regions where composites are largely applied in sectors which have recovered more quickly from the economic crisis. In Germany, for instance, large volumes of composites have been flowing into research and development, transport and the electrical and electronics industries.

Funds for research and development, particularly in the mobility sector, have increased greatly in recent years, due to growing efforts to achieve lightweight construction. This has been of special benefit to the German market with its characteristic focal areas and state subsidies.

Another factor that is supporting this positive trend is an increased interest in thermoplastic composites systems. In recent years above-average growth has been noticeable both in long-fibre and continuous fibre-reinforced composites (LFT/GMT) (see Fig. 2: Development of GMT/LFT compared with total market). 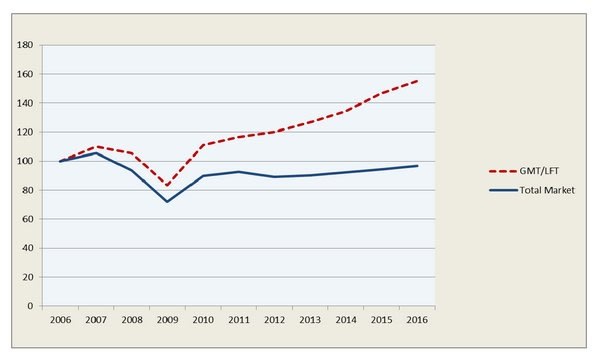 Due to the specific qualities of those material systems and especially their benefits in serial manufacturing, it is often believed that thermoplastic composites are beacons of hope, making it possible to move more vigorously into new areas of application, especially large-scale production, though also into structural segments of application.

One way to be successful in this area is to consolidate the industry and its activities. For quite a while now – since 2000 – many AVK members have therefore collaborated within a special workgroup on thermoplastic composites. The EATC (European Alliance for Thermoplastic Composites) comprises more than 20 companies and institutions. Its activities include a regular seminar on the subject (“Potential of Thermoplastic Composites”, soon to be held at BYK in Wesel on 2 March 2017).

Also, nearly two years ago, several well-known raw material manufacturers formed an alliance under the umbrella of the AVK and decided to conduct a long-term project. Its purpose is to establish the more widespread use of continuous fibre-reinforced thermoplastics in the automotive industry. The project group is continually in touch with numerous OEMs, seeking to generate specific results that will eventually benefit the entire market. The first phase of this project was concluded recently, when the project group also decided to continue its work. A further roadshow on the subject has been scheduled for the summer, with a presentation of the latest results.
Read more:
Analysis 107
Statistics 9
Composites 134