2017-01-04
Tweet
To identify the gases released, a thermo microbalance combined with an infrared spectrometer was used. An analysis of the changes in mass and outgassing substances was carried out. The changes in mass were measured with the thermo balance. Integrated flow controllers ensured precisely regulated flow quantities for two flushing gases and one shielding gas. The gases released from the samples by the thermal analysis were passed directly into the Fourier-Transform infrared spectrometer, which covers a spectral range from 500 cm-1 up to 6.000 cm-1. The data were transferred online during the measurements. With this method, Rohde & Schwarz was able to prove beyond doubt that processing of the Teflon used does not involve any health or safety hazard for the workers.

Next, a trial mold was produced to examine how Teflon can be processed on a micro injection molding machine. Following a positive outcome and calculation of the shrinkage behavior, Rohde & Schwarz undertook the construction of a mold for series production, which was manufactured on a high-precision eroding machine in the company's own mold making shop. After sampling and adjustment of the mold and investigation of process capability, the release for series production could be granted.

With the production of micro parts made of Teflon by high-precision micro injection molding, Rohde & Schwarz plays the part of a pioneer in the market. These elements, originally manufactured as turned parts, are produced on two micro machines from Wittmann Battenfeld which, due to their specific design, offer a high level of process reliability and precision and are consequently ideally suited for continuous production of parts whose tolerances are in the magnitude of one thousandth. In order to achieve these extremely low tolerance margins, the micro machines stand in an air-conditioned room where both temperature and humidity are kept constant. For the same reasons, the molds and the material are also stored in this room.

Since the parts produced with the micro machines do not have to be deburred, the downstream finishing required for turned parts is dispensed with, which makes for a significantly more cost-efficient production of the elements. Apart from the positive results which Rohde & Schwarz has achieved with the micro machines from Wittmann Battenfeld in the production of Teflon parts, the company particularly appreciates the machines' modest space requirements, which are due to the design of the machines as well as the complete integration of the robots and peripheral appliances specially developed for these machines, and the integrated image processing device. Moreover, the micro machines from Wittmann Battenfeld equipped with rotary disks perfectly fit the mold concept of Rohde & Schwarz and are therefore quickly upgradable. Furthermore, Rohde & Schwarz appreciates the possibility of purchasing both machines and peripherals from a single source within the Wittmann Group. Johann Haimerl, responsible for high-precision technology in the company, puts it in a nutshell: "At Wittmann Battenfeld we have just one contact partner for the entire package. That facilitates negotiations enormously." 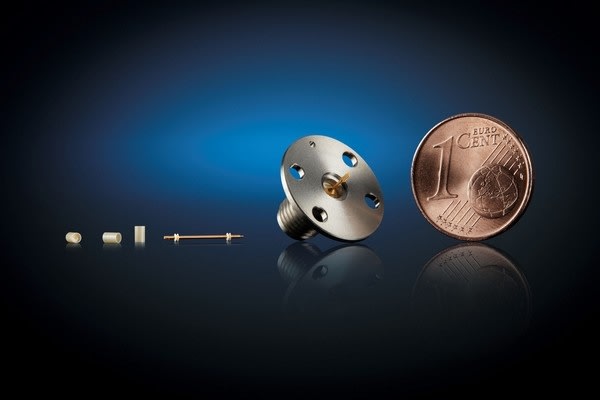