2017-01-04
With the production of micro parts made of Teflon by micro injection molding, Rohde & Schwarz plays a pioneer role in the market. These high-frequency technology components, until recently still produced as turned parts, are now manufactured on machines from Wittmann Battenfeld specially designed for injection molding of small and micro parts.

The company's facility in Teisnach was opened in 1969. The role of the Teisnach plant, where more than 1,400 workers are employed, is that of a system supplier and competence center for mechanical and electronic manufacturing in the network of Rohde & Schwarz. The product portfolio supplied by the Teisnach plant ranges from high-precision and surface engineering, housing technology, manufacturing of circuit boards and the assembly of electro-mechanical components right up to testing and automation solutions. In the area of high-precision mechanical engineering, Rohde & Schwarz in Teisnach offers both non-cutting machining processes and cutting production technologies such as turning, milling and drilling in combination with appropriate high-precision surface engineering.

For the production of high-precision plastic parts with tolerances down to +/- 7 µm, Rohde & Schwarz has been using micro injection molding machines from Wittmann Battenfeld since the end of 2012. In November 2012, the Microsystem 50 machine model designed for injection molding of micro parts was commissioned. In November 2014, this was followed by a MicroPower 15/7.5, a micro machine of the latest generation from Wittmann Battenfeld. As a fully integrated production cell, the MicroPower is equipped with a W8VS2 Scara robot from Wittmann and an integrated TEMPRO Micro temperature controller also specially developed for micro applications. Apart from their high cost-efficiency and productivity, the machines from the MicroPower series stand out primarily by their extremely high precision, which is partly achieved by the use of a two-step screw-and-plunger injection aggregate with shot volumes ranging from 0.05 to 4 cm³. And this high standard of precision is exactly what Rohde & Schwarz needs for the production of its micro parts primarily built into the high-frequency components also assembled at Rohde & Schwarz. The company produces 100% of the molds made of hardened steel in-house. Its mold-making shop is equipped with high-precision eroding machines, with the help of which mold components are manufactured primarily by wire-cut EDM within tolerances down to +/- 3 µm. The equipment is also designed in-house at Rohde & Schwarz. This not only enables the company to manufacture molds with the accuracy required for the production of its high-precision parts, but also offers the advantage of short lead times in mold production for highly flexible response to market demands and the needs of its customers. 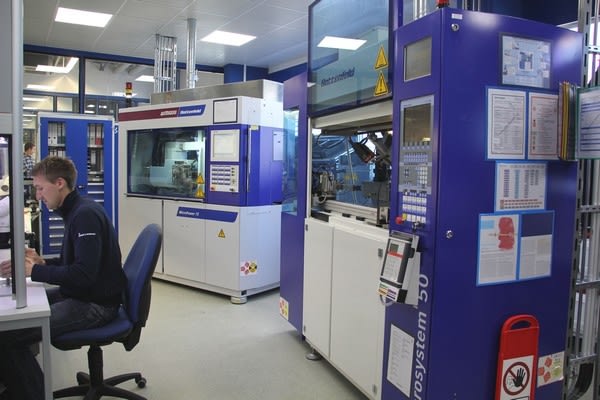 Typical micro parts made by Rohde & Schwarz in Teisnach are, for example, power plugs with a tolerance margin around +/- 12 µm between the internal and external conductors.

The company's latest product newly developed in the area of high-precision micro injection molding is a Teflon spacer used in high-frequency components. This part, originally manufactured as a turned part, can now be produced by micro injection molding at significantly lower cost than before. The complex preparatory work necessary to achieve the changeover of this originally turned part made of Teflon to production by micro injection molding was due primarily to the specific characteristics of Teflon. Since certain gases and/or fluorine compounds, which are detrimental to health, can be released at high temperatures in hot processing of Teflon, several analyses had to be carried out to ascertain which decomposition products may be formed, in which quantities these are released, and whether they could involve health hazards for the workers. The quantities of decomposition products depend not only on the plastic material processed as such, but also on the additives contained in it and, last but not least, the hot processing method used and the temperatures involved. The micro injection molding machines from Wittmann Battenfeld operating at a temperature of about 350° C are completely encased and equipped with an extraction unit. 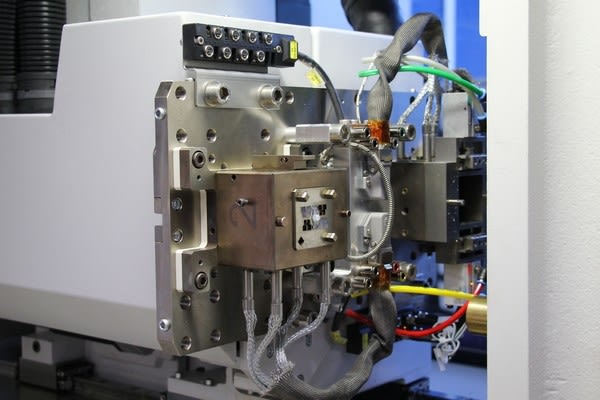