2015-03-23
Tweet
"The development of the FDC system was a logical next step for us in our strategy of offering our customers extremely economical pipe extrusion lines", says Kottmeier. Over the last seven years, the output of battenfeld-cincinnati pipe extrusion lines has roughly doubled. While in former times lines with 600 kg/h were regarded as high-performance equipment, throughputs of 1,200 kg/h and more are today’s standard in the production of gas and potable water pipes. Reaching such throughputs requires not only extremely powerful, all-purpose extruders with innovative screw concepts, but above all appropriate cooling systems for fast pipe cooling, to ensure observance of pipe tolerances and to reduce the overall length of the line.

Lines from battenfeld-cincinnati have both: the solEX 75-40 main extruder exhibited on this occasion is a very powerful extruder with a processing length of 40 D, which provides gentle plasticizing across a large processing window. Thanks to its combination of a smooth spiral mandrel for melt pre-distribution with a compact lattice basket for detail distribution, the helix 800 VSI-TZ+ pipe die used in this line offers the advantages of low pressure build-up and functionality independent of melt viscosity. The effective EAC internal pipe cooling system enables the high line speeds and, together with the active melt cooling system inside the die, minimizes undesirable sagging. This also contributes to the excellent pipe quality.

The other line components are also laid out for maximum flexibility and cost efficiency. This is why, following the pipe head, the line operates with an adjustable melt gap instead of a pin-and-die combination, which would have to be exchanged for a dimension changeover. A coex radial distributor is integrated in this adjustable melt gap to enable color changes to be effected quickly and with maximum efficiency. Therefore it is possible to not only change the pipe dimension with minimum waste of material on the battenfeld-cincinnati FDC line, but to implement an equivalent color change of the outer layer as well. Due to the fast color change options, the benefit from this line has again been increased considerably. Moreover, with its 4-layer co-extrusion configuration, the line can produce pipes not only for standard applications, but also for special industrial applications, for example where an oxygen barrier layer must be integrated into the pipe wall.

The vacStream 800-6 vacuum tank has also been specially designed for the automatic dimension change and consequently the high flexibility of the line. It operates with a pipe support device across 180° of the pipe circumference and is steplessly adjustable across the entire range of dimensions (200 – 800 mm) without any structural changes. The flexible sealing at the end of the vacuum system stands out by its simple structure without any mechanically moving parts and has already been used many times for retrofitting on existing extrusion lines. During a dimension change, the haul-off and cutting devices are also adjusted automatically to the new dimension at exactly the right time. In order to effect the automatic changeover without any problems and fully automatically, the battenfeld-cincinnati specialists have optimally expanded the BMC touch extruder control system so that the changeover of all components takes no more than the push of a button. 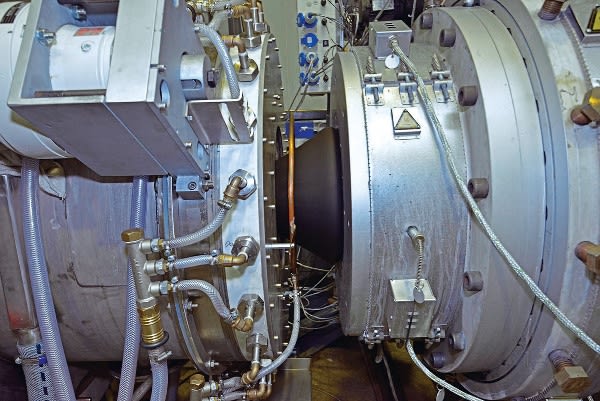