Scodix appoints Derprosa as the sole supplier of films for lamination

2013-09-06
Tweet
After several years of collaboration, the international digital finishing company Scodix has chosen Derprosa as its official supplier of films for lamination, which are used in its Premium printing process called Scodix Sense.

Scodix, has established itself as one of the leading companies in the industry of graphic finishes. Recently the company has confirmed its leadership with the award Intertech Tecnology 2013 for Excellence in Innovation.

Amongst their advances in printing Scodix has developed Scodix Sense, a process of improvement in the printing of graphics which applies a film of plastic that allows for revolutionary finishes, with the intention of transforming an ordinary graphic design into something extraordinary.

Derprosa has been chosen as a leading provider of these films, both for its technical efficiency of gluability, stampable and printability, and the variety of films in terms of effects.

The key to this innovative technique printing achieves revolutionary impact through a digital printing process using Derprosa films, which help to highlight the finishes, thanks to its surface properties, optical and tactile (for example, a metallic or softness touch).
Derprosa films can be laminated on various substrates and can be finished with most available technologies. 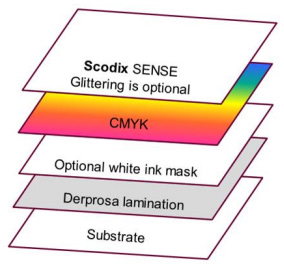 Ultimately this type of printing results in a higher quality with cost and time savings compared to the traditional processes.

Amongst the effects that these films can offer, highlights include Silver metallic finishes (without using metallic inks), tactile finishes that provide softness to the design of the film with SoFT TOUcH or colour Films that gives a more uniformed and clean printing thanks to the range Elegance. As well as other antibacterial, anti-scratch or ecological properties can be combined with the different finishes.

Scodix Sense aims to give a plus to the designs with a process which incorporate finished first, thanks to the use of Derprosa films, responsible for providing the outcome chosen.
Thus, the symbiotic relationship between the two companies has reached a higher point of commitment through the agreement of close collaboration and partnership. As a sign of the alliance, Scodix invited to Derprosa to participate in its stand at Print 13, one of the most prestigious trade shows of the sector.
Read more: Film 127