2016-04-08
Arburg will be exhibiting on Stand 25 in Hall E at the Plastpol, to be held in Kielce, Poland from 17 to 20 May 2016. As a highlight, the German machine manufacturer will be presenting the Golden Electric series, its new electric entry level machines. These have been available worldwide since March of this year and, thanks to consistent standardisation, offer an excellent price/performance ratio.

A hybrid Allrounder from the Hidrive series will also demonstrate a complex application for the packaging sector.

"The Plastpol is the most important trade fair for the plastics industry in Poland. As a premium manufacturer, we are aware of a growing willingness among our customers to invest in sophisticated technology and top grade machine quality," said Dr. Slawomir Sniady, Managing Director of Arburg Polska Sp. z o.o. "The new Allrounders from the Golden Electric series continue the success story of the Golden Edition hydraulic series and expand our product range to include high-performance entry-level electric machines for the precise, energy-efficient production of complex moulded parts."

A new Allrounder 570 E Golden Electric with a clamping force of 2,000 kN and size 800 injection unit will produce two CD trays in a cycle time of around 15 seconds at the Plastpol 2016. The 74 gram moulded parts made from PS will be handled by a linear Multilift Select robotic system.

The second exhibit will be a hybrid high-performance Allrounder 720 H from the Hidrive series with a clamping force of 3,200 kN and size 1300 injection unit, which will produce flip-top closures for the packaging sector. A 16-cavity mould from Polish company ZPTS Witoplast will be used to produce the 3.5 gram closures made from PP. The cycle time is around 12 seconds.

Designed for standard applications in thermoplastics processing, Allrounder Golden Electric machines offer an excellent price/performance ratio thanks to their consistent standardisation, e.g. through the fixed combination of distance between tie-bars, clamping force and injection unit size. The new machines are available in four sizes: 370, 470, 520 and 570 with clamping forces of 600, 1,000, 1,500 and 2,000 kN.

In terms of the recognisable need for a practical range of electric machine sizes on the international markets, the introduction of the Golden Electric series comes at just the right time. An increasing number of processing companies are attracted by the benefits that electric machines combining features for standard applications,such as precision, energy saving and reproducibility in a cost-effective way provide. The new electric Allrounder Golden Electric machines deliver the perfect solution. Together with the successful Golden Edition hydraulic series, they form Arburg's "golden family". 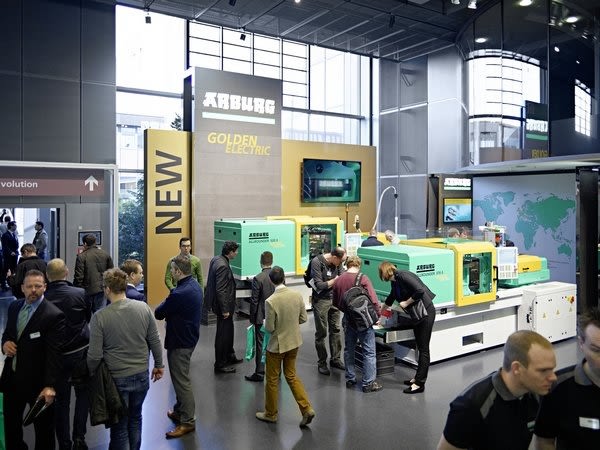