2011-04-19
Tweet
Weight is everything in aircraft – and body weight can be significantly reduced by using plastics composites.

The next generation of passenger aircraft benefits from plastic innovations. 22% of the components in the Aibus A380 are made from plastics. In new planes like the Airbus A350 (due 2013) and the Boeing 787 Dreamliner this proportion of plastic used in the construction will increase to 50%.

The first round the world flight in a solar airplane has been made possible by the innovative use of plastics. The Solar Impulse project, the brainchild of Bertrand Piccard and André Borschberg, aims to develop the first manned flight around the world during both the day and night propelled with only solar energy.

The prototype airplane has the wingspan of a large airliner (63.40 meters) and the weight of a midsize car (1,600 kg). Over 12,000 solar cells cover its surface. They run four electrical engines and store the energy for use at night in 400 kg of lithium batteries.

High-tech polymer materials used on the plane include polyurethane rigid foams for paneling in the cockpit and engine, and extremely thin yet break-resistant polycarbonate films and sheet for the cockpit glazing. Carbon nanotubes help increase battery performance, improve structural components and reduce weight. 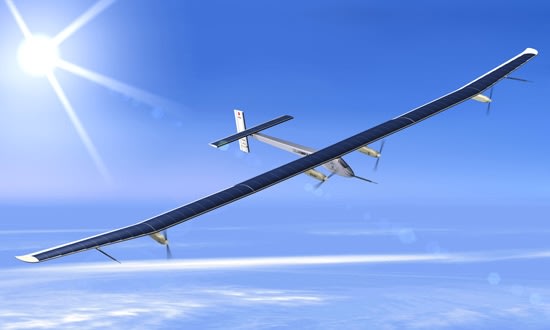