2011-11-14
Tweet
In the shape of the Steinecker TFS 300/1000, Krones AG was at the Brau Beviale 2011 premiering a pilot filter that enables the dimensioning of a beer filtration system to be simply and accurately planned in advance.

Pilot planning of a new filter system creates numerous advantages: firstly, the general usability of alternative filtering aids can be tested without incurring any major financial outlay. The decision in favour of any alternative filtering aids will then be based on specific measured data and not on theoretical guideline values. Secondly, the dimensioning parameters of a future industrial-scale system can be individually determined, enabling the capital investment and operating costs to be accurately calculated. Since the filterability of the beers involved is known precisely, commissioning times on site can be significantly shortened. 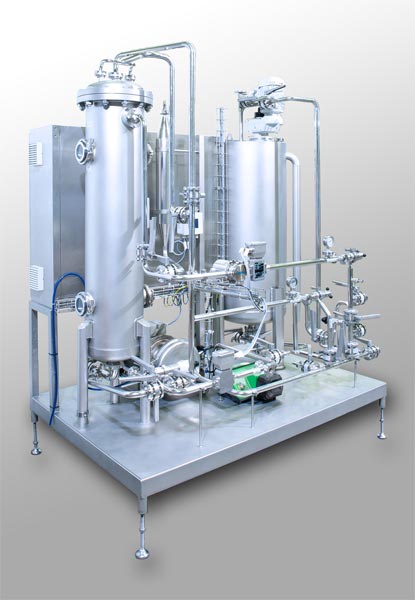 A pilot planning routine is begun by drawing up a schedule of trials based on the filtering aids and types of beer available. The pilot filter is then erected in the plant concerned, and integrated on the unfiltrate side, bypassing the brewery’s existing filter system. This means there are no product losses, and dependable quality is assured.

The TFS 300/1000 pilot filter is fitted with a register and seven candle connections, possesses a filtering area of 0.73 square metres and is precoated at a rate of around 700 litres per hour. The filtration output lies at approximately 530 litres an hour. Now the trials and the analytical monitoring of the filtered beers can be carried out, and the results evaluated and discussed.

For this purpose, the turbidity measurement curve is plotted at 25 and 90 degrees, the development of the pressure differential is analysed, and a microbiological check performed on the filtered beer. Finally, the results obtained are utilised for dimensioning the industrial-scale system.
Read more: Machines 478