2012-04-02
Tweet
Hekuma, one of the leading manufacturers of high performance automation systems, will exhibit the high-speed version “DS” from the proven “HEKU-Series for the first time at this year’s NPE show in Orlando.

For the new development of the “HEKU DS”, Hekuma concentrated on both the design and the innovative drive concept for the removal of small, lightweight, fast running, high volume parts. With an acceleration of up to 30G’s and a speed of up to 10 meters per second, the HEKU DS is likely the fastest robot on the market today.

The handling system in a new variant of the Sigma Inside manufacturing cell will be integrated with an injection molding machine from Engel. Finished part will be removed and placed, separated by their specific cavity. Compact, economical and extremely fast.

“Our task was to develop a new generation axis specifically for small, light parts in the high speed sector. That is why we needed to come up with a new design concept. Among other things, we reduced the moving mass compared to our standard series HEKU 2 and utilized low friction ceramic spheres in the guide rails. Everything was sized for extremely high acceleration and optimum tolerances”, according to Michael Schmidt the engineer responsible for the design who added “a series of tests showed surprisingly good performance data. 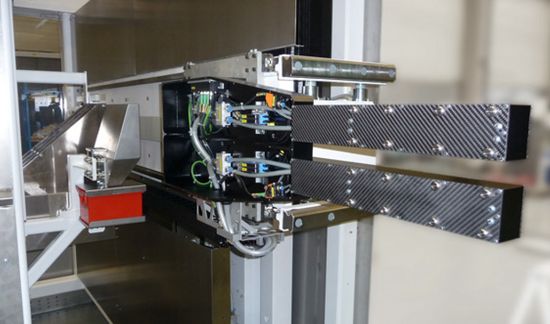 The HEKU DS definitely is one of the fastest robot axes on the plastics market.” In contrast to the traditional vertical arranged robot axes, the HEKU DS is built to stand on its side. The aluminum/carbon fiber gripper therefore is not cantilevered and the motions are absolutely symmetrical to the line of force. That is the only possibility for the guide rails to withstand the acceleration. Moreover, the degree of contamination is reduced which is a must for clean room applications. The welded frame is also symmetrical and allows for installation in any direction.

The removal arm of the HEKU DS consists of hollow, milled aluminum components that are covered with carbon fiber plates. The combination of metal and carbon fiber allows for a light but very stable assembly that prevent unwanted oscillation and vibration. The hollow frame of the gripper body allows for plenty of space for QC specific components such as vacuum sensors, light curtain amplifiers and the manifold for vacuum and electrical connections.

For short removal strokes in the high performance sector, acceleration and deceleration are key. Direct linear drives, for example, often move an “empty” mass of 40-80 kg that reduces acceleration and costs unnecessary energy. The development team of the HEKU-Series has utilized an energy efficient lightweight servo controlled belt drive system for years. Michael Schmidt explains “The challenge was now to take a drive belt axis and exceed the previous performance. To achieve this, we implemented a synchronized dual servo drive on the robot axis.”

The HEKU DS will be presented for the first time at this year’s NPE in Orlando Florida, USA. The robot axis will be integrated into a clean room version of the “Sigma-Inside” cell. At the Engel Machinery Inc. booth, an E-Motion 200 will produce a medical part in a 16 cavity mold. Having a removal stroke of 450mm, the high-speed axis achieves a removal time of approximately 0.18 seconds; about twice as fast as a linear direct drive axis in the same performance class of 10,000 N.

The production concept of “Sigma Inside” was successfully introduced at the 2011 Fakuma show in Germany. Since then, 8 systems have been delivered and more are in the order books. The basic principal of Sigma Inside is simple and efficient: Free-fall parts of various shot weights are removed by a gripper and are placed in a cavity specific manner. The advantages are obvious: Higher quality through careful removal, greater productivity through fewer rejects and targeted defected part detection at the cavity level.

Hekuma will display a simplified version of the Sigma Inside at the NPE. The molded parts will be removed from the side and placed in a distribution chute and in turn placed into pre-staged bags without the need for an additional 90 degree rotation. A seamless check to ensure each part is removed from the mold is done through the monitoring of the vacuum at the gripper and a light curtain prior to the release of the part to the chute. The direct “blow off” of the molded parts simplifies the removal process with one less motion and thereby provides a compact, modular and extremely economical production solution for high volume free-fall parts.
Read more: Machines 478

Manufacturer of automation systems for injection molding and the plastics industry