Following the announcement of the award in early December by French Secretary of State in charge of Industry, Christophe Sirugue, the company was invited to present its award-winning Virtual Commissioning Project at the 2nd Franco-German Conference on Digitalization (Deutsch-Französische Digitalkonferenz) held on 13 December 2016 in Berlin. The conference was attended by 300 high-ranking representatives of start-ups, international companies and public institutions, including top ministers and the leaders from both countries.

This mark is awarded by AIF to companies that implement new tools such as digital data exchange and advanced robotics to drive the transformation of business models and organisations as well as design and marketing methods.

Gebo Cermex has been actively working along these lines and this award recognises the significant contribution made by its Virtual Commissioning project - which was led by the team based in Saint Laurent sur Sèvre. Key achievements - which helped the company to meet in full the requirements listed by AIF - included a 20-30% decrease in lead times and production costs; a long-term approach towards zero defects, dramatically improving quality and accuracy; and increased reliability, due to the ability to show customers, in advance, details about the performance of their equipment.

Gebo Cermex was selected by AIF as the only award-winning French SME to be championed at the meeting in Berlin: this initiative is part of a long-standing and close partnership between France and Germany, to drive forward the digital transformation of their economies. In all only 3 companies were invited to showcase their projects to the exclusive audience attending the 2nd Franco-German Conference on Digitalization.
Laurent Filliaudeau, St Laurent Site Director, said: "To be able to present our project to both François Hollande and Angela Merkel was an honour for me and for the entire team which has been working on this project with dedication and commitment." 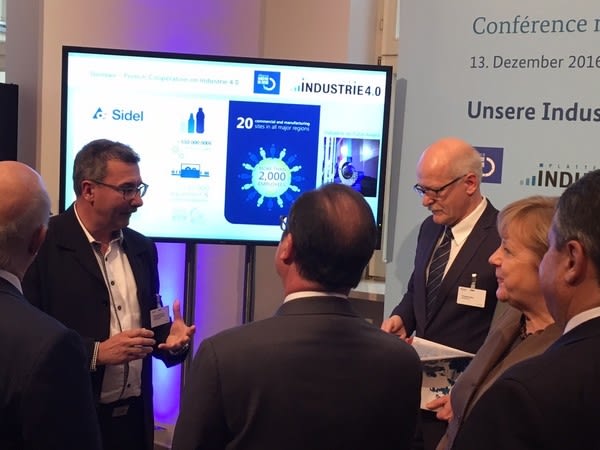 Highlighting the importance of investing in Industry 4.0 possibilities to build long term competitive advantage, Marc Aury, President and Managing Director at Gebo Cermex, added: "Industry 4.0 is currently a much-discussed topic in manufacturing. With people now showing different consumer behaviours that influence their purchasing decisions, and distribution looking for more customised delivery methods and increased responsiveness, the packaging industry needs to find new ways to improve line operations in terms of speed, efficiency, flexibility and versatility, to protect its competitiveness in a global, fast-changing market and to help secure the future of European businesses. We see this award as a clear recognition of our efforts, as the first SME (Small Medium Enterprise) to offer Virtual Commissioning to its customers."

Earlier this year, Gebo Cermex unveiled its Agility 4.0 programme, designed to enable producers to manufacture small production batches at cost levels typically associated with mass production, without compromising on key performance criteria such as Overall Equipment Effectiveness (OEE), Total Cost of Ownership (TCO) and sustainability, to name but a few. It represents a proven, pragmatic approach to make the benefits of Industry 4.0 possible: from initial virtual design to total mastery of the extended factory. The Agility 4.0 programme encompasses smart machines, system and data intelligence, digital connectivity and powerful simulation tools, all within a philosophy of sustainable production.

One of the key aspects of the Agility 4.0 programme is the ability to use high-precision simulation and modelling tools to allow customers both visualise and forecast, so that they can make all the right decisions and thus keep their Operating Expenditure (OPEX) to an absolute minimum. This is particularly true in the commissioning phase, when new equipment has to be physically assembled and tested in a workshop, taking approx. 200 hours - with 46% spent in problem solving activities, and 54% covering testing and tuning. The real innovation of the Gebo Cermex Virtual Commissioning project is that it makes it possible to dramatically decrease the time and costs involved, while anticipating the challenges the equipment might face when installed in the actual production environment. In fact, the Gebo Cermex engineers use advanced tools to virtually build the full machine, checking, in parallel, even the smallest details. This allows them to export the virtual model in the simulation tool and to visualise how the equipment behaves. The virtual 3D model can be viewed, operated and animated via a Human Machine Interface (HMI). Moreover, the virtual commissioning allows for a 3D model to perform a big part of the de-bugging process ahead of installation and it is possible to simulate many scenarios in which the equipment might be working when integrated in the customer's plant, without using the actual machine. 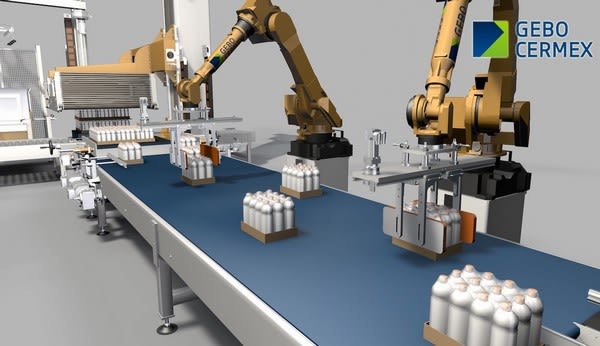