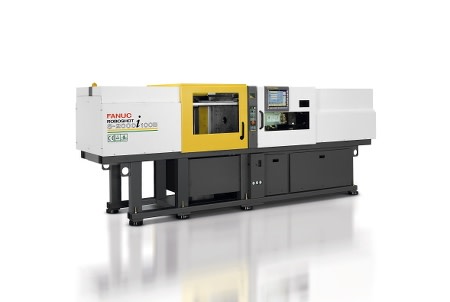 Filigree functional parts with many complex geometries, as produced in very large quantities in the electric and electronic industries, require maximum precision when it comes to surface finish, contour accuracy, weight and reproducibility. A well-known customer provided Fanuc with a complex mould for the manufacture of connectors. With a shot weight of 22 grams four functional components in PBT are produced simultaneously in a cycle time of 12 seconds. Part removal is handled by a three-axes linear robot - equipped with Fanuc servo drives and control - by systems partner Hi Tech Automation.

The Roboshot electric IMM operates with extremely low energy consumption. Its control monitor indicates the actual power consumption and regenerated power in a graphical and a numerical display. Also, the accumulated power over a specified period, the trend of power consumption and power demand are displayed. Energy savings are realized by the following features: Fanuc's superior motion control technology for high efficiency and power recovery.
The feature of energy recovery - whereby the servo-drive motors in the Roboshot machines generate electrical energy as they decelerate, when closing and opening the mould after locking - contributes a tremendous potential for reducing energy costs. "We utilize kinematic and turn it into regenerated power instead of discharging thermal energy into the air," says Wolfgang Haak, Applications Engineer at Fanuc, and adds that "the amount of energy produced in this way depends on the machine and process, but it amounts to around 10 percent of power saved on average, on top of the 40-60 percent lower energy consumption of electric machines as opposed to hydraulic ones. Today, we must not forget the issue of CO2 emissions: the greater the energy requirements of a manufacturing plant, the higher are the CO2 emissions. With our Roboshot machines, less energy is required from the national power grid, which means lower emissions and the protection of our environment."