2016-04-14
The inauguration ceremony for the new Arburg Innovation Centre (AIC) at Karlsruhe Institute of Technology (KIT), Germany, was held on Monday 11 April 2016. In their addresses, the head of the Institute, Prof. Jürgen Fleischer and Arburg Managing Director Technology & Engineering, Heinz Gaub underscored the importance of the new facility for the cooperation between research and business.

The new Arburg Innovation Centre is certainly an impressive sight: the AIC features a high-tech, modern design and the approximately 60 square metres of floorspace accommodates two Freeformers (additive manufacturing systems) and one Allrounder (injection moulding machine), a free-standing six-axis robotic system and several workstations and information panels for staff at the joint facility.

In his inauguration speech, Arburg Managing Director Heinz Gaub emphasised the value of uncomplicated cooperation between the KIT and Arburg. "We came up with the idea for this Innovation Centre together and then turned it into reality," said Mr Gaub. Delighted with the successful cooperation, he added, "After all, the AIC not only looks good, but is also backed up by a great deal of expertise." In Mr Gaub's view, as the Institute for Production Science at Karlsruhe Institute of Technology (KIT), the wbk is an ideal research and cooperative partner for Arburg, which is why the company was happy to support the idea of the Innovation Centre.

Representing the wbk, Prof. Jürgen Fleischer referred to the long-established collaboration between the KIT and Arburg, which started at the beginning of the new millennium. He went on to say that the Innovation Centre bridges the gap between the scientific acquisition of knowledge and the establishment of market viability. "Here, we can see science and industry working hand-in-hand in a professional venture," said Prof. Fleischer. He expressed his delight with this high point of cooperation between the two sides and his hope that this would be an indicator of the things to come.

The Karlsruhe Institute of Technology (KIT)

According to its own statement, Karlsruhe Institute of Technology (KIT) pools its three core tasks of research, higher education, and innovation in a mission. With a staff of around 9,300 and 25,000 students, KIT is one of the largest research and teaching institutions for science and engineering in Europe. As "The Research University in the Helmholtz Association", KIT fully exploits its synergy potential resulting from combining tasks of national big research with those of a state university. In order to meet its three core tasks, KIT is organised in five Divisions: Mechanical and Electrical Engineering; Biology, Chemistry, and Process Engineering; Informatics, Economics, and Society; Natural and Built Environment; Physics and Mathematics.

In order to achieve a high level of production efficiency when producing in small batches down to a single unit, Arburg developed the Freeformer for additive manufacturing and presented it to the international public as a companion to its Allrounder injection moulding machines in 2013. The Freeformer uses an additive process to produce fully functional plastic parts using 3D CAD data and qualified standard granulates. 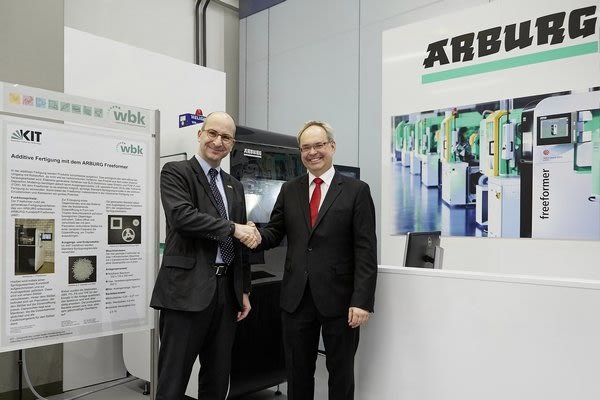