Production capacity of bio-based polymers will triple by 2020

2013-03-08
Tweet
The nova-Institute carried out the market study of bio-based polymers in collaboration with renowned international experts. It is the first time that a study has looked at every kind of bio-based polymer produced by 247 companies at 363 locations around the world and it examines in detail 114 companies in 135 locations.

The most dynamic development is foreseen for drop-in biopolymers, which are chemically identical to their petrochemical counterparts but at least partially derived from biomass. This group is spearheaded by partly bio-based PET (Bio-PET) whose production capacity will reach about 5 million tonnes by the year 2020, using bioethanol from sugar cane. The second in this group are bio-based polyolefins like PE and PP, also based on bioethanol. But "new in the market" bio-based polymers PLA and PHA are also expected to at least quadruple the capacity between 2011 and 2020. Most investment in new bio-based polymer capacities will take place in Asia and South America because of better access to feedstock and a favourable political framework. Europe's share will decrease from 20% to 14% and North America’s share from 15% to 13%, whereas Asia's will increase from 52% to 55% and South America's from 13% to 18%. So world market shares are not expected to shift dramatically, which means that every region of the world will experience development in the field of bio-based polymer production. 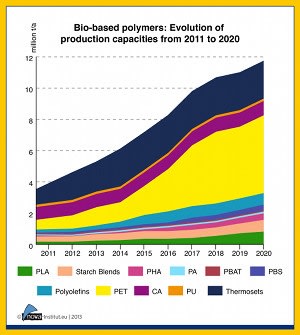 Michael Carus, managing director of nova-Institute, reacted to the survey results thus: "For the very first time we have robust market data about worldwide production capacity of all bio-based polymers. This is considerably higher than in previous studies, which did not cover all polymers and producers. The forecast of a total capacity of 12 million tonnes by 2020 - a tripling of 2011 levels - suggests that bio-based polymers are definitely polymers for the future. It is also shown that the development of bio-based polymers is still very dynamic. Only five years ago, nobody would have expected bio-PET to grow to the biggest group among the bio-based polymers due to an initiative by one big brand-owner. This could happen again with any other bio-based polymer. PLA and PHA also have a remarkable growth ahead of them, even without the existence of such a 'supply chain captain'."
Read more: Bio-based materials 49 Bioplastics 105