2016-09-07
Pollmann International GmbH is convinced of Netstal's expertise and has ordered one of the first machines of the new Elios series even before its official launch. An Elios 6500 will meet the growing demand for thin-walled plastic parts for lightweight design applications in the car manufacturing sector. Netstal will present the more powerful 7,500 kN version of its new premium injection molding machine to an expert audience for the first time at K 2016 in Düsseldorf (October 19-26, 2016, Hall 15, Stand B27/C24/C27/D24).

The new Elios series machines are already making their mark. While the new Elios 7500 premium injection molding machine is not officially introduced until the K trade fair in October, Netstal has already booked a few pre-orders. The Austrian company Pollmann International GmbH is among those who are banking on the new Elios. Pollmann and Netstal have been working together successfully for years. During that time, a lot of confidence has been developed in Netstal's competence as well as the outstanding quality and high performance of the injection molding machines from Näfels.

Maximum security as a result of the cooperation with Netstal

Pollmann is involved in the development and series production of complex and intelligent mechatronics assemblies and products made from the material compound of plastic and metal. Nowadays, there is hardly an automobile brand that does not install an assembly from Pollmann in its vehicles. In the source project, Pollmann chose EVOS series machines. "The incredible performance of the machine and Netstal's many years of experience with thin-walled packaging and lightweight design gave us the utmost security in this project," said Manfred Jäger, a buyer of capital goods for Pollmann. "The challenge of this application was particularly great. It was obvious to us that, if somebody was able to solve the problem, it would be Netstal," Jäger emphasized. Since then, the production of the highly complex and thin-walled plastic components on the EVOS has been very successful and stable.

In order to meet the increasing demand of customers, Pollmann will soon need an additional, larger injection molding machine. Lightweight design is continuously advanced in the automotive sector. That is why plastics are increasingly used in many parts of the vehicle in which they could not have been used previously. A constructive lightweight design allows the production of lightweight components made from technical thermoplastics that have the required rigidity. That is why there was a lot of immediate interest in the new Elios with a clamping force of 650 tons. "The specified technical performance features of the new machine fully convinced us beforehand. That is why, on the basis of trust and experience, we placed an order to be able to produce on a new Elios as quickly as possible," Manfred Jäger emphasized. In addition, the new innovative drive concept of the Elios has additional strategic advantages for the customer. With the fastest clamping unit in its size class and the use of a larger mold, Pollmann will be able to significantly increase its production volume per time unit. The increased energy efficiency also results in a reduction of the unit cost. In combination with the precision and reliability that is typical of Netstal, each company receives a perfect injection molding solution. 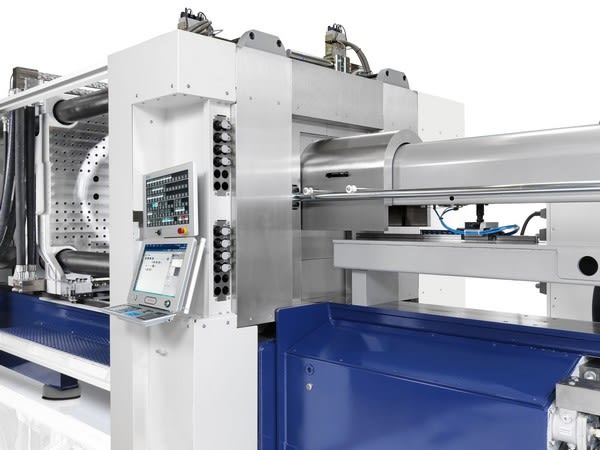 During the K 2016 in Düsseldorf, the large version of the new Elios with a clamping force of 7,500 kN will officially be launched. With the Elios 7500, Netstal succeeded in transferring the high speed and precision to a 750-ton clamping unit with electrical movement. As a result, according to Euromap, the new machine currently offers the fastest dry cycle in its size class. During the eight days of the trade fair, more than 43,000 domed lids with a part weight of 2.8 grams will be produced per hour in a 24+24 stack mold. This corresponds to an impressive cycle time of just 4 seconds.