2016-07-14
At this year's plastics trade fair, battenfeld-cincinnati will be introducing a newly developed series of high-performance single screw extruders: the solEX NG (NG = Next Generation) series. Developed on the basis of the proven solEX series, this new generation features a completely new processing unit which offers a multitude of advantages, such as a lower melt temperature and energy costs reduced by up to 15%.

Based on the proven solEX 40 D extruder series, which had already been designed for high-performance applications, the battenfeld-cincinnati engineers have now successfully developed a new groundbreaking processing unit. Barrels, screws, and grooved bush have all been completely redesigned.

The major changes are an internally grooved barrel, a screw con-cept that consistently applies the theory of dispersive melting, as well as a feed zone with a completely revised geometry and fitted with spiral grooves. All three components are ideally matched, thus enabling a further improvement in the process attributes.

One of the benefits offered by the innovative design of the pro-cessing unit is an increase in melting capacity, along with gentle and energy-efficient processing. Thanks to this, the melt temperature in the extruder is reduced by up to 10°C for comparable outputs, while the melt homogeneity remains at a consistently high level.

The modification in the conveying mechanism leads to a significant reduction of the axial pressure profile in the feed zone and the barrel, thus reducing pressure across the entire system and ena-bling an increase in the specific output level. In addition, the processability of regrind is improved, so that higher amounts of regrind can be processed without impairing process behavior. Fur-thermore, it is expected that wear behavior will also significantly improve, which contributes to considerably higher process reliability when using critical materials. Less wear means lower maintenance costs and consequently higher efficiency.

In this context, the reduction of energy consumption thanks to the new processing unit is another decisive factor. Energy cost savings of up to 15% are possible: Firstly, less drive energy is required and, secondly, due to the cooling of barrel and grooved bush sig-nificantly less heat discharge is necessary. And the new processing unit offers yet another advantage: As the basic structure of the extruder was retained from the previous series, existing solEX models can be retrofitted with the innovative NG processing unit.

The solEX NG series not only complements the wide range of battenfeld-cincinnati single and twin screw extruders, but also the portfolio of solutions for large-diameter pipe extrusion, where battenfeld-cincinnati is the technology leader. The solEX NG ex-truders with their high outputs and excellent melt processing ca-pacities are ideally suited for PO pipe lines with diameters of up to 2.6 m. 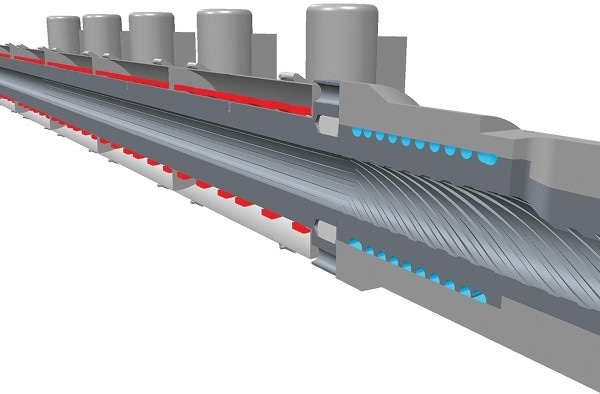