2016-08-19
Tweet
MSV, the most important mechanical engineering fair in the Czech Republic and Slovakia, opens its doors to trade visitors in Brno from 3 to 7 October 2016. Over the years, the trade fair has welcomed more than 1,500 exhibitors and 75,000 visitors from 59 different countries. There is an increasing demand for high-end technology. Accordingly, Arburg is showing a production cell built around an electric Allrounder from the new Golden Electric series in Hall G1, Stand 36. A six-axis robot handles automatic part removal and set down.

"We enjoy a very strong position in the Czech and Slovak markets. Hence the MSV show is particularly important for us," explains Dr Daniel Orel, Managing Director of the Arburg subsidiary in the Czech Republic. "We intend using our appearance at the show to present innovative technical solutions that will be of great interest to the high-end plastics industry in our region." He pointed out that the automation business had developed steadily. Capacities at Arburg's Czech subsidiary have increased in recent years through the construction of an assembly hall for turnkey systems and the expansion of a project team. In addition to consulting and spare parts services, the Brno location also offers detailed training courses.

It features proven, high-quality Arburg technology "Made in Germany" at an attractive price/performance ratio. This is made possible through standardised components, such as a fixed combination of distance between tie-bars, clamping force and injection unit size. The Allrounder Golden Electric is available in four sizes: 370, 470, 520 and 570, with clamping forces of 600, 1,000, 1,500 and 2,000 kN.

In Brno, an Allrounder 520 E Golden Electric with a clamping force of 1,500 kN and a size 400 injection unit will use a single cavity mould from Czech mould manufacturer TVAR to produce a food storage container from PP. The moulded part will weigh 72 grams and the cycle time will be around 22 seconds. A special vacuum unit in the mould helps with the evacuation of the cavity in order to assist with the injection moulding and even shaping of the parts.

The exhibit will be supplemented with a robot cell with a six-axis robot from Kuka, which removes the finished parts from the mould, closes them and sets them down in a magazine for further processing. The gripper, parts magazine and housing of the entire production cell have been precisely tailored to the production task by the automation specialists at Arburg's Czech subsidiary. The material will be prepared and transported by an Arburg Thermolift with air dryer, while a cooling unit from Slovakian manufacturer Jarestherm will ensure the best possible production temperatures. 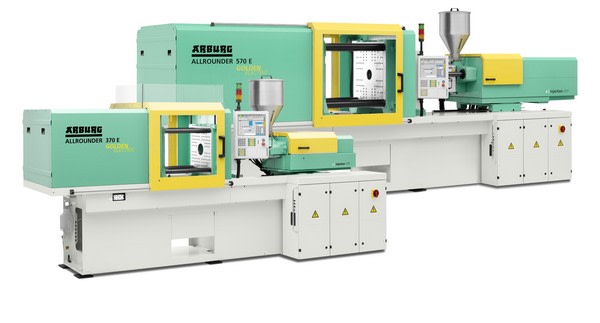