"Junialis 2016" with focus on automation and Industry 4.0

2016-06-24
On 14 June 2016, Arburg Hungary once again hosted the "Juniális" in Budapest. More than 90 existing and prospective customers responded to the invitation this year to find out about current trends in the subjects of automation and Industry 4.0. In addition to presentations on these two topics, the guests were also able to view interesting practical applications at this traditional June event.

"The Juniális 2016 was a great success for us in quality as well as in quantity", summed up Stephan Doehler, European Sales Director and responsible for Arburg Hungary. "The participants were highly interested in our turnkey business and the Arburg host computer system and learned about the present state of Industry 4.0 in the plastics industry." He added that it is often many small solutions in combination that can significantly improve production efficiency and part quality in injection moulding plants.

"Industrie 4.0 - powered by Arburg" was the title of the specialist presentation held by Balazs Domokos from the Hungarian subsidiary. During his talk, he explained how market requirements are changing and how Arburg as an innovative machine manufacturer is developing into a supplier of flexible production systems for IT-networked production in the "smart factory". Peter Mező went into further detail on which individual solutions Arburg offers in automation and in the turnkey business. As a prime contractor, Arburg covers the entire spectrum: from consulting and project planning, implementation and installation, through to service for the complete production cells.

At the Juniális 2016, Arburg presented its standardised control system philosophy and range of automation sector products based on the playful practical example of "Robots in action". An Integralpicker V, a linear Multilift V robotic system and a six-axis robot moved a fleet of Bruder model vehicles around an obstacle course. The task was to load and unload two dumper trucks and a tractor with hay bales. The three automation units communicated with one another by means of peripheral-equipment interfaces. As a further exhibit, a hydraulic Allrounder 470 C Golden Edition, equipped with a Multilift Select, demonstrated the efficient manufacturing of small parts boxes. 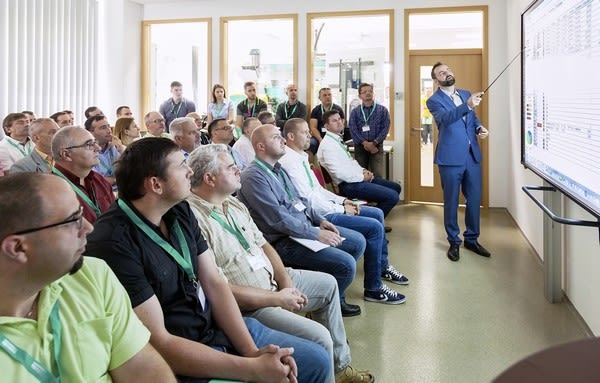