First report on biocomposites production in the EU

2013-11-28
Tweet
The report also gives an overview of the latest market development in North-America and Asia and an overview and forecast of the global WPC market situation, which has grown up to 2.5 million tonnes of production in 2012. China has the strongest growth rates with a production volume of 900,000 tonnes in 2012 and is trying to catch up with the largest WPC production volume in the world, which takes place in North America and has grown to 1.1 million tonnes of WPC production in 2012. The share of WPC decking in the total decking market is increasing again, after a period of housing crises and WPC quality problems that have led to a shakeout of the top WPC producers.

In China, also decking has the largest market share compared to other WPC applications, mainly through strong exports, although the domestic market has steeply developed in recent times. China hosts also the largest window and door market of the world. Hence companies lately have started to produce commercial window frames with WPC, with approximately 40% of wood fibre that substitutes PVC in combination with aluminium. China produces a large variety of WPC for indoor applications. Another successful product is an extruded WPC door that is already produced by 30 companies. 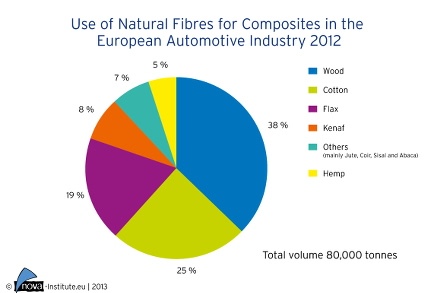