Engel at the Plastics & Rubber Vietnam 2016

2016-01-12
At the Plastics & Rubber Vietnam from March 1st to 3rd, 2016 in Ho-Chi-Minh-City, everything at the Engel stand revolves around efficiency. Noodle containers are being produced on an Engel victory 500/160 tech injection moulding machine with an integrated Engel viper 6 linear robot - with a particularly high level of floor space productivity, very low unit costs and top process consistency.

Consistent quality, permanent machine availability, maximum output and top economic efficiency – these are decisive factors for competitiveness on the international markets. As a technological leader with great expertise in system solutions, the injection moulding machine manufacturer Engel with headquarters in Schwertberg, Austria, is the ideal partner for achieving a perfect union of all these requirements. Based on the individual requirements, Engel develops custom-tailored solutions which can include not only the injection moulding machine, but also automation, moulds and process technology. When all components of a manufacturing cell are perfectly coordinated right from the outset, it is then possible to fully exploit the efficiency potential and realise extremely low unit costs. The production of noodle containers during the four days of the trade fair is a practical illustration of such an achievement.

The machine used for this purpose will be an Engel victory 500/160 tech injection moulding machine with a clamping force of 1600 kN. The fact that the bulky noodle container mould - constructed by Donghae Plastic Company in Gyeonggi-do, South Korea - fits on a comparatively small injection moulding machine is due to a special design feature of the Engel victory machine: the tie-bar-less clamping unit. Because there are no tie bars in the way, the mould mounting platens can be fully used up to their very edges. Motors for core-pulls or other functional components can even jut out beyond that. For the fabrication of products with an elaborate geometry but rather small projected area and thus low clamping force requirements, a smaller injection moulding machine can often be used than the mould size would dictate when using a traditional machine with tie bars. Thus savings are achieved in expenditures for both investments and running costs and the production cell is kept compact. This increases the output per square metre of production space, which has become a key figure for efficiency in an increasing number of businesses.

More than 25 years ago, Engel became the first injection moulding machine manufacturer worldwide to develop a series of machines with a tie-bar-less clamping unit, and still today this remains a unique product that distinguishes Engel on the market. Further benefits of the tie-bar-less technology include fast mould set-up processes and efficient automation solutions because robots can access the mould area directly from the side without having to circumvent any obstacles.

The patented Force Divider flexlink ensures high precision and process consistency. Thanks to the preloaded tension of the Force Divider, the parallelism of the mould mounting platens remains constant even while the mould is being mounted. In addition, the Force Divider distributes the clamping force evenly across the entire platen face, resulting in extremely consistent wall thicknesses, in particular in moulds with multiple cavities.

At the trade show, an Engel viper 6 linear robot is used to remove the noodle containers from the mould and place them on a conveyor belt. When Engel is the supplier for both the injection moulding machine and automation, the RC300 robot controls are integrated into the CC300 control unit of the injection moulding machine, further boosting overall efficiency. The operator benefits in particular from the consistent control logic and the shared database. This not only reduces the risk of data-entry mistakes, but also makes it possible for the robot to coordinate its movements with those of the machine. Thus the robot arm can already enter the mould area during the opening movement, reducing cycle times.

With nine production plants, 29 sales and service subsidiaries and 60 representatives, Engel is close to its customers all around the globe. The decentralised production on three continents guarantees short lead times worldwide and speeds up the adaptation of the injection moulding machines, robots and system solutions to specific individual requirements. Engel is the only western injection moulding machine manufacturer with three production plants in Asia. 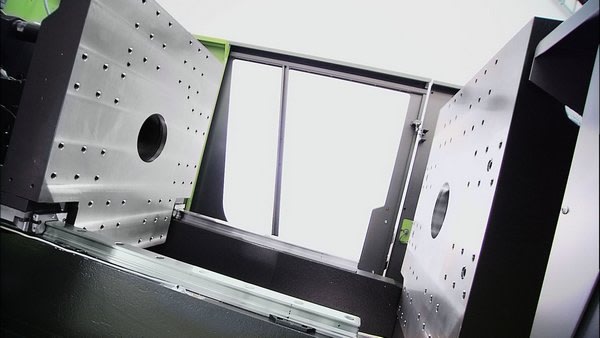