2016-06-28
The films with the decoration are moved with a film feeding unit supplied by Leonhard Kurz, Fürth, through the mould from HBW Gubesch, Wilhelmsdorf, and back injected with PC/ABS. A six-axis robot from Kuka manages handling of the moulded part in the production unit. Automation is supplied by SAR Elektronik, Dingolfing. It removes the finished part from the mould and conveys it to a curing and cleaning station supplied by Kist Maschinenbau, Dresden. All controls for individual line elements are visible and can be operated through a VNC integration in the injection moulding machine control system. The machine encompasses the activeMouldWater module for electronic monitoring of mould temperature control based on the temperature and flow and an OPC/UA interface for communication conforming to Industry 4.0.

The compact and flexible production unit is an example of the integration capacity of Demag machines and the technological expertise to operate sophisticated applications for the automotive and consumer markets. In the fast-growing IMD application market, engineers from Sumitomo (SHI) Demag can access a dense network of competent partner companies, who have been cooperating on numerous successful projects for many years. Sumitomo (SHI) Demag is considered the market leader when it comes to injection moulding machines for IMD applications.

IntElect is the all-electric injection moulding machine range from Sumitomo (SHI) Demag. It is equipped with innovative high-torque direct drives specially developed for this purpose, thus ensuring the highest level of precision, dynamics and energy efficiency. IntElect operators profit from decades of expertise in the area of electric drives pooled in the Sumitomo Group and a high vertical range of manufacturing in motors and control technology. At K 2016, Sumitomo (SHI) Demag demonstrates an IntElect with the smallest and a model with the largest of the seven clamping forces, which range between 500 and 4,500 kN. 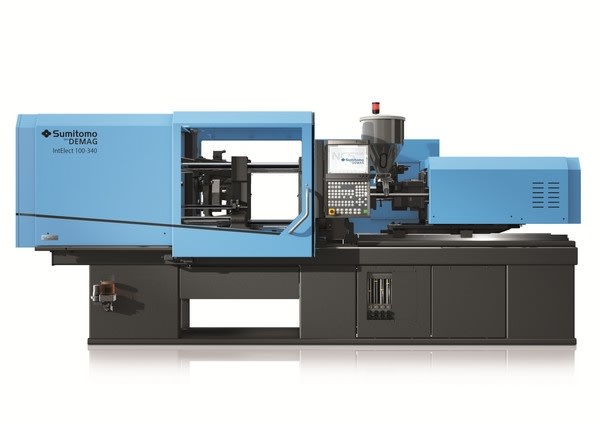 The largest IntElect 450 available to date manufactures crystal-clear polycarbonate headlight covers in a highly efficient electric production unit. The mould and hot runner system are provided by HRS INglass, San Polo di Piave/Italy. The mould for large surface moulded parts, which need to meet high optical requirements, runs with electrically controlled HRS Flex-Flow system hot runner needles. Gentle opening and closing of the needles prevents sink marks on the moulded part, which are not uncommon with conventional cascade injection moulding involving abrupt sequential closing of hot runner needles. The automation with a 5-axis SDR 5X-35 robot was designed and manufactured by M.A.i. in Kronach. A special feature is the true-to-contour separation of the sprue realised with the aid of a laser. Due to the integration of the hot runner control in the machine control system, the exhibit can fully benefit from the sensitive guidance of the injection process. IntElect demonstrates the advantages of all-electric concepts where even larger moulded parts are manufactured through injection moulding and is an example of the "Automotive Goes All-Electric" trend in the sector.