Arburg to present the "smart" luggage tag at Hannover Messe 2017

2017-02-20
Arburg will present a pioneering Industry 4.0 application at the "Digital Factory" leading exhibition held as part of the Hannover Messe 2017 from 24 to 28 April: "Smart" luggage tags will be produced according to the principle of spatially distributed production in the smart factory. The exhibit on the Arburg stand K16, in hall 6, illustrates flexibly automated, cost-efficient production in single unit batches. Injection moulding, industrial additive manufacturing and automation are combined for the customer-specific individualisation of the product and the process data is recorded using the Arburg host computer system (ALS).

Talking about the highlights of the practical 4.0 application, Heinz Gaub, Managing Director Technology & Engineering at Arburg says: „Our mini factory on the Arburg stand K16 in hall 6 as well as the related "web shop" belonging to our partner Pöppelmann (stand B18) illustrate the key elements of Industry 4.0: sequential manufacturing at spatially distributed locations, 'mass customisation' - in other words the customer-specific individualisation of high-volume parts through the combination of injection moulding and additive manufacturing - as well as the end-to-end traceability of each individual part using our Arburg host computer system (ALS)."

At the first station, an individual turnkey solution, consisting of an Allrounder 375 V and a flexible, space-saving robot cell with integrated six-axis robot, produces the "luggage tags" in high volumes. The robot removes the finished moulded part and subsequently fits an NFC (Near Field Communication) chip. The integration of the chip means that the product can save and communicate information.

The recorded data includes the date of manufacture, the cycle time, injection pressure and processing temperature from the injection moulding process and the visitor's personal data, which is added later, as well as the process data from the additive manufacturing stage. 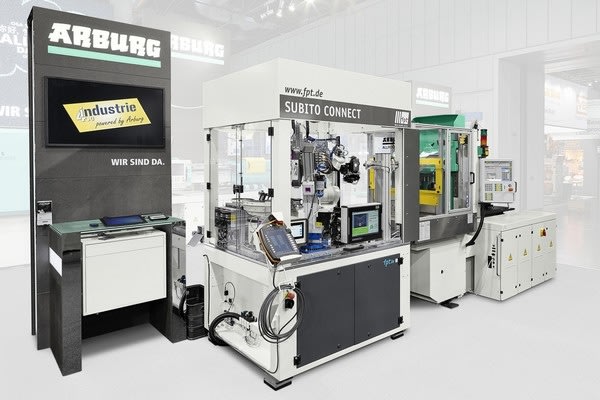 The next step in the flexible production process can take place both on the Arburg or on the Pöppelmann stand: The user selects a graphic motif for the design of the tag at an input terminal and has his electronic calling card (vCard) produced. On the Arburg stand K16, the data is transferred directly to the NFC chip of the luggage tag. Pöppelmann demonstrates on its stand B18 the benefits of the "web shop" as a 4.0 business model. The customer simply enters his individual product requirements. A QR code is generated from his "order" and this is either mailed directly to his smart phone or printed on paper. On the Arburg stand, this information is read by means of a scanner and the relevant order data is transferred to the NFC chip in the luggage tag for the next production process.

Thus, the part itself becomes the data carrier, identifying itself at the various stations and controlling its continued production process. Each luggage tag is also assigned its own website in the cloud. This is also where all process and quality data recorded by the Arburg host computer system (ALS) are archived. 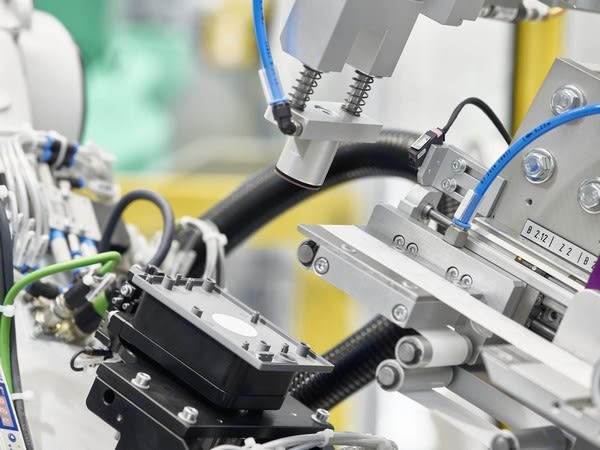 During the subsequent laser marking, the personalised data, such as name, address, phone number and vCard are added to the luggage tag in the form of a QR code. All of the part handling tasks are performed by an Integralpicker V.

Subsequently, a Freeformer further individualises the luggage tag by additively applying the graphic motif selected at the second station in 3D using TPE plastic. The high-volume product has been transformed into something unique.

Station 5: Use of smart product for online actions

At the last station, visitors learn how they can use their smart luggage tag to execute data-supported actions, such as the online ordering of brochures using the integrated NFC chip. In addition, the contact data can be read out via the QR code or the NFC chip. This contains the individual URL address of the website for the relevant product, enabling all process and quality data to be traced on a 100 percent basis at all times. 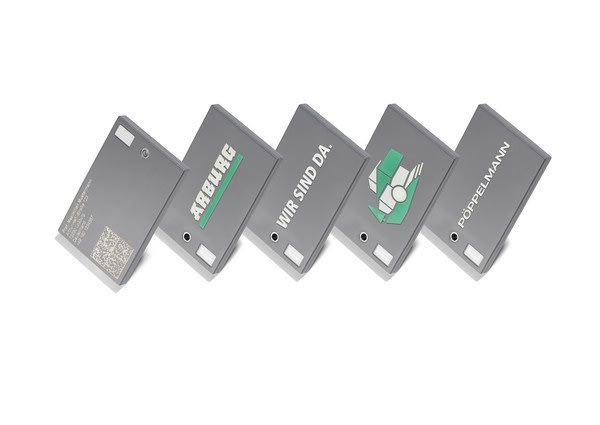 "Digital networking promotes transparency and consistency and facilitates the optimum utilisation of the entire production capacity, particularly in relation to smaller unit volumes and frequent product changes," says Axel Kinting, Control Technology expert at Arburg, explaining the benefits for injection moulding companies. "We are going to show visitors how 4.0 components from Arburg can be combined on an individual basis to efficiently implement flexible high-volume production in batches as small as a single unit." Managing Director Heinz Gaub adds: "It takes a company with total control of the production and IT aspects of the process chain to provide the comprehensive Industry 4.0 expertise that our customers need."

With three decades of experience with IT networked machines and peripheral equipment, Arburg is an industry leader in Industry 4.0. The Arburg host computer system (ALS) can record and archive all relevant production and quality data, ensuring the complete traceability of orders, batches and individual parts. The control system is a central element in digital communication. The Euromap 77 host computer interface uses an independent communication protocol known as OPC UA and enables high speed exchanges between the machine and host computer. Machines and peripheral equipment components can be networked in a simple, standardised way. ALS also has a certified interface with SAP.
Read more:
Injection moulding press/machines 736