Arburg's Industrie 4.0 at the Hannover Messe

2016-02-17
Polish version
At the Hannover Messe, to be held from 25 to 29 April 2016, Arburg will be presenting the smart factory concept and the topic of Industry 4.0 based on a practical application. A fully IT-networked and comprehensively automated production line for individualised office scissors will be on show. An Allrounder injection moulding machine and a Freeformer for additive manufacturing will be linked by means of a seven-axis robot. The process and quality data will be recorded by the Arburg host computer system (ALS) and archived in the cloud. The data for each separate part can be accessed via a specific website at any time using mobile devices.

"One of the challenges during the production of small-volume batches and one-off parts is not to forego cost-effectiveness and availability. We will be demonstrating this at the Hannover Messe 2016 based on the example of office scissors. We individualise this high-volume part and incorporate specific customer requirements directly into the production chain," explains Heinz Gaub, Arburg Managing Director Technology & Engineering. "For this task, we combine injection moulding, additive manufacturing and Industry 4.0 technologies in a flexibly automated, cyberphysical production system." Heinz Gaub believes that the future lies in the "smart factory" that will control and optimise itself. In other words, production data will no longer be managed centrally, but displayed and evaluated on a mobile, decentralised basis.

With automated Allrounders, the central Selogica control system, the Freeformer for additive manufacturing, and IT solutions such as the Arburg host computer system (ALS), Arburg offers comprehensive expertise in flexibly automated, IT-networked production technology. Visitors to the exhibition stand visitors will be able to produce unique versions of various office scissors during a "live" demonstration.

When entering their orders, they will create their own individual lettering on a tablet PC. The corresponding data will be recorded digitally and forwarded to the Allrounder injection moulding machine so that high-volume production can start. For flexible and fast production changes, human and robotic system work interactively: A drawer system first supplies the operator with the appropriate type of scissors for the order - for left- or right-handed users, pointed or rounded ends. The operator then places the stainless steel blades directly into the gripper of a linear Multilift V robotic system, which transfers the insert to the mould.

An electric Allrounder 370 E is used to mould on the plastic handles, after which an individual Data Matrix (DM) code is applied by laser. From this moment on, the product itself becomes a data and information carrier and even has its own website. It identifies itself to the machines and supplies information for the next production step. Furthermore, all process steps can be documented seamlessly and error-free, meaning that the relevant process parameters can later be uniquely traced. The finished scissors are inserted by the Multilift V into workpiece carriers on a conveyor belt. 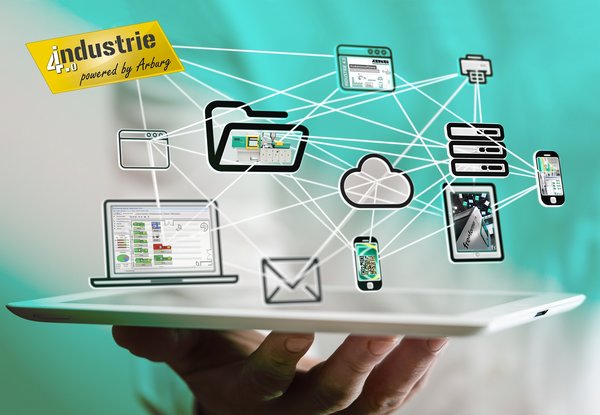 At the Hannover Messe 2016, a mobile Kuka "iiwa" (intelligent industrial work assistant) seven-axis robot will link injection moulding with additive manufacturing. This is designed for autonomous human/robot cooperation and does not require a safety enclosure. The "iiwa" removes the workpiece carrier with the scissors from the conveyor belt of the injection moulding cell. In order to initiate the next production step, the office scissors are identified via their DM code by means of a scanner. The Freeformer features a Euromap 67 interface which allows it to communicate with the seven-axis robotic system. The cover is opened and closed fully automatically, enabling the robot to load and unload the build chamber.

The Freeformer finishes the office scissors with individual 3D lettering in polypropylene (PP). Before they eventually reach the visitor, the finished scissors undergo a final quality check.

The Arburg host computer system (ALS) plays a central role in networking the autonomous stations, recording all the relevant production data and test results before transferring them to a central web server. This is where all process and quality parameters come together and are archived. In order to record the machine data, the ALS relies on worldwide Ethernet real-time networking standard for the machines and links the process chain by means of the OPC-UA application protocol. Each part is assigned its own website in the cloud which can be accessed with mobile devices using the individual code. This means that all relevant process data for each individual part is fully traceable, even after several years. This is important in practice, e.g. for the purposes of just-in-time production and safety-relevant components. 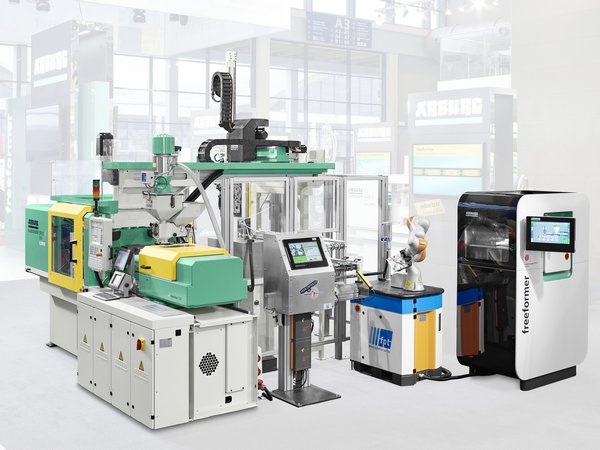