2015-10-09
Tweet
The Austrian plastics recycling machine manufacturer ARTEC has completed the expansion of its 2013 introduced, completely redesigned and modular system technology to a graduated model range. In parallel, a number of development projects and patents, to increase process efficiency, have been brought to series maturity. These process technology innovations are the focus of ARTEC fair presentation in Hall A6 / Stand 6107.

The module series for the recycling of post-consumer plastics, introduced on the K 2013, is now available for throughputs ranging from 100 up to 2500 kg/h. The advantage of the new generation of systems is the enhanced ability to process post-consumer materials with higher levels of contamination and a higher content of moisture, as well as the significantly increased energy efficiency of the recycling process. A major share of the efficiency improvement is due to the procedural innovations which have been developed jointly with the system components.


Saving energy at the cutting compaction of plastic flakes

To increase efficiency of the cutting compaction process, ARTEC focuses on the optimization of all energy flows in and out of the process, not just limited to the dimensions of the driving power for the cutting rotor. Consequently the housing of ARTEC-cutting compressors is executed double-walled with an intermediate layer of insulating material. In addition to noise reduction, the start-up time is significantly shortened through a more rapid achievement of the process temperature. A further advantage is the possibility of processing of materials with high moisture, as the vessel insulation prevents a re-condensing the already evaporated water at the container inner wall, and this therefore does not have to be re-evaporated. In addition an exhaust, integrated in the cutting compressor hood, enables the selective removal of the evaporated water and thus ensures energy-efficient processing of feedstocks with a moisture content up to 25%.

For a responsive temperature control during cutting compaction process ARTEC has
developed a system, which does not require the usual evaporative cooling in the material agglomeration by a water injection into the cutter/compactor room. It works with a cold water pulse-cooling system in two opposite, double-walled housing sections of the cutting compactor. Its function is controlled automatically by a temperature control circuit and performs peak heat from heat transfer to the cooling medium without increasing the moisture content of the plastic material again and thus extending the processing time. The contact between the plastic material and the "water pockets", is produced by centrifugal force. Below the maximum temperature range, the process temperature is adjusted by adding of cold feedstock in combination with the rotation speed adjustment of the compactor rotor. 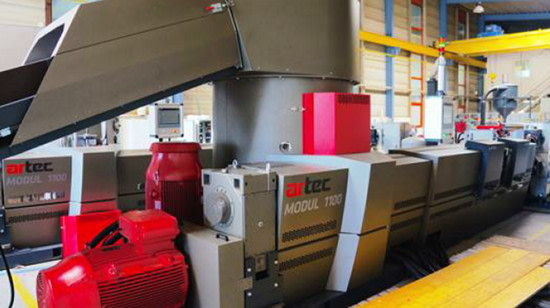 Another "bottleneck" for the efficiency of a recycling system is the interface between the cutter/compactor and the extruder. Here, there is a risk of over- or under-filling of the extruder feed-zone, as well as the return-flow of already fed material from the open lower screw thread sections. ARTEC has defused these inefficiencies by a patented innovation. It is about a device to customize the size and relative position of the material transfer window to fill the extruder depending on the processed material quality. For this purpose, a system of two sliding plates was placed between the extruder and the cutter/ compactor. With the positioning of the lower slide plate (manual positioning via set screws) a material-related basic settings is fixed. It covers the lower portions of the screw-flights, thus preventing a return-flow of material. The position of the upper slide can be adjusted by means of e-motor drive during production, whereby the plasticizing and feeding efficiency of the extruder is optimized. 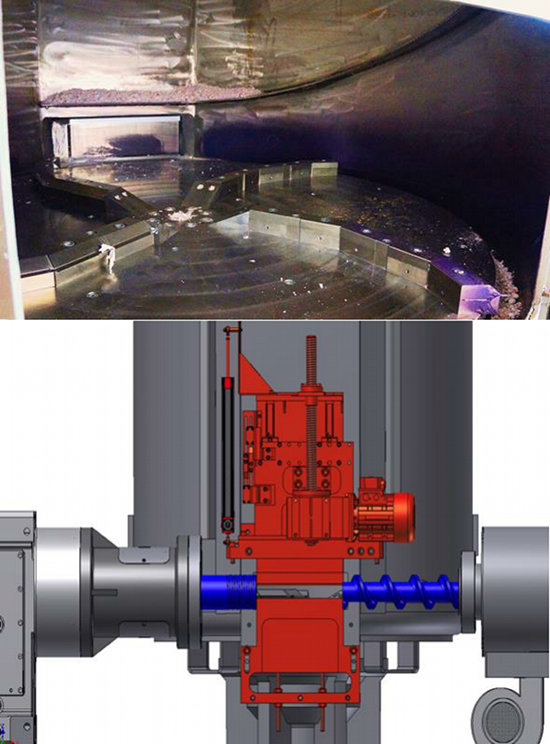 One of the most visible progress of the new ARTEC-machine system is the ergonomic improvement of all system components. Generously dimensioned sliding panels and inspection doors facilitate access to all system components. These include the slidable electrical cabinet as well as the height-adjustable control display for ergonomic adaptation to the operator. The logically structured operator interface of the control unit fits into this concept and offers a largely self-explanatory operation and a clear visualization of the entire process. Material-related setting parameters can be stored in an integrated data set memory. Due to the integrated possibility for internet connection performance-datas can be queried externally and service requests handled remotely. An optional mobile control-display or a camera system facilitates the optimization of start-up-procedures by direct observation of the input stream of material and its processing in the cutter/compactor.